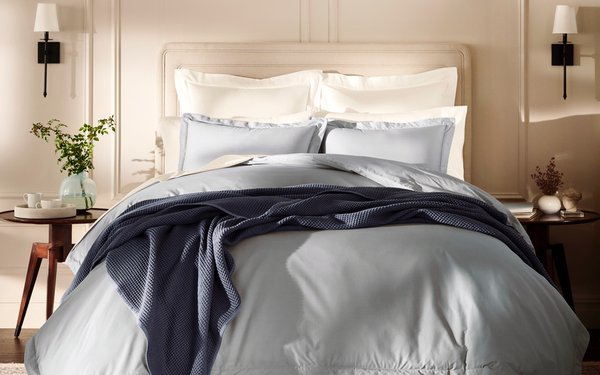 While Boll & Branch has made organic, fair-trade cotton its central purpose since the bedding company launched in 2013, its mission has never been more important. The tragic human consequences of conventionally grown cotton in China, India and beyond has consumers looking harder at every textile purchase. Scott Tannen, co-founder and CEO, tells D2C FYI why demystifying the supply chain is so important.

D2C FYI: I know you and Missy, your wife, started Boll & Branch back in 2013. What made you see bedsheets as an opportunity?

Scott Tannen: We were redoing our bedroom and moving from a queen to a king bed. We needed new sheets, and Missy started shopping and couldn’t find any information about where the cotton in sheets actually came from. So I did that obnoxious husband thing and said, “Let me do it. It can’t be that hard.” I jumped on Google, and quickly found out it was complicated.

So I met with suppliers, who all told me their sheets were made in Italy, using Egyptian cotton. I was thrilled, since I happen to be a history buff who’s always wanted to go to Egypt. I actually pictured myself standing on the banks of the Nile, talking to farmers.

I had to reverse-engineer their supply chain to learn the truth: Their “Egyptian” cotton was actually grown in China, by borderline slave labor. Sheets were made there. Only the label was added in Italy. Right then, I knew this was a category in desperate need of disruption. Any time a customer is consistently buying and paying for something that's not actually what they're paying for, you’ve got a great opportunity.

D2C FYI: You’ve grown to be the No. 1 consumer of fair-trade organic cotton, buying more than giant companies like Nike and Patagonia. How did you do that?

Tannen: We started with the source. The most important thing in any textile is the quality of the raw material. So we discovered incredible smallholder farms all over Southern India, many family-opened and backed by NGOs. We learned so much. Most people don’t know how toxic conventionally grown cotton is. Pesticides get into the groundwater, and on average, farmers in these regions only live to be 35. Cancer rates are off the chart.

So we started working with a cooperative to help turn organic cotton into a cash crop. With money, they can bring in education, healthcare and clean water. With no irrigation -- they use monsoon season -- they grow incredible cotton. I was already good at marketing, from my background at Wrigley and Mondelez. I knew I could turn this cotton into incredible, luxurious sheets that people would love.

D2C FYI: What’s your impact been?

Tannen: Millions of people are sleeping on the highest quality set of sheets that you can buy, at a competitive price point. And in the communities where we buy the cotton, we now have helped 50,000 live above the poverty line for the first time in their lives.

D2C FYI: And the commitment to organic cotton is what builds your brand?

D2C FYI: Initially, you bootstrapped, then took $100 million from L Catteron, the private equity firm, back in 2019. Why the switch?

Tannen: I had just sold a business when we started and invested that, and our whole life savings, into Boll & Branch. I had about $5 million in debt, with multiple mortgages on our house. There’s nothing like signing your life insurance policy over to a bank instead of your kids to put that in perspective. I needed to reduce my risk.

We used that capital to invest in our own infrastructure. We now operate in three different places in India, and have factories in Pakistan, Portugal and in the U.S. We’re not racing toward an IPO or looking to sell. We want to build a strong business.

D2C FYI: Do you think that makes you different from other D2C companies?

Tannen: Yes. They may have fancy logos, but they are often no different than an infomercial brand. They hire too many people. And they can’t turn a profit because they don’t have good fundamentals. I really admire Spanx, as a point of comparison. Yes, it grew really quickly. But it fills a need, and it’s a very good product. It’s going to be around for a while.

D2C FYI: How do you differentiate yourself from competitors?

Tannen: Look, we didn’t invent the bedsheet. But what sets us apart is our commitment to sustainability -- and marketing. I’m glad I grew up working on brands like Oreo and Chips Ahoy. It taught me to form an emotional connection and offer real, true benefits.

If a competitor called and wanted to know how to do this, I’d tell them -- I actually care about all the people marginalized by the textile chain. But most companies don’t want to put in the work.

D2C FYI: Who is your core audience?

Tannen: Not millennials, so we don’t spend a ton on social media. We focus more on a somewhat older, female audience we call Settled Suburbans.

D2C FYI: And your marketing approach?

Tannen: We do market research -- which, believe it or not, few D2C companies do. Because I come from CPG, I make sure we have a really good understanding of every message we put into the marketplace.