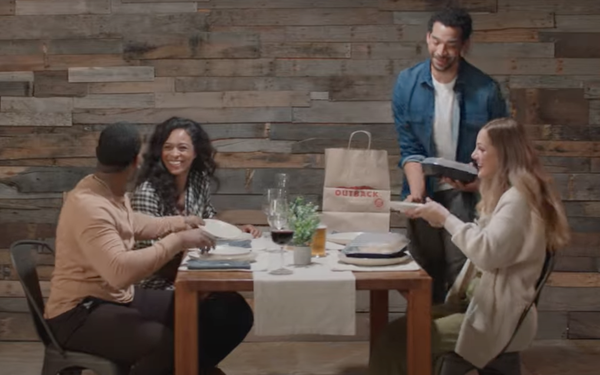 Bloomin’ Brands is gaining market share in fast-casual dining. And even as diners return to in-person meals, it plans to expand on its booming digital business., including its popular "bundle" offers. It’s also shifting marketing tactics, funneling more funds into digital advertising channels as it continues to cut back its reliance on discounts and limited-time offer promotions.

The news came as the Tampa, Florida-based company, which owns Outback Steakhouse, Carrabba’s Italian Grill and Bonefish Grill, posted quarterly results above expectations, as well as a robust forecast for the months ahead.

For the year ahead, Bloomin’ Brands expects total revenues of between $4.3 and $4.35 billion. Brian Mullan, an analyst who follows the company for Deutsche Bank Securities, says that is “well above investor expectations.”

And while the company -- and the entire casual dining category– -- is always vulnerable to downturns in consumers’ discretionary spending, its “balance sheet is in a fundamentally better position exiting 2021 than it was exiting 2019,” he adds.

For the full year, Bloomin’s off-premises sales topped $1 billion in 2021, up 147% versus 2019, with gains in both carry-out and delivery. Some 70% came through digital channels, and its new app has been downloaded 1.4 million times.

“We expect off-premises to remain a large and growing part of the business going forward,” says David Deno, chief executive officer, commented  during a webcast for investors. “Importantly, profit margins in this channel are approaching the margins of the in-restaurant business.”

The company also says it plans to raise menu prices about 5%, more than initially forecast. That comes as restaurant chains grapple with food inflation, struggling to establish how much of those costs it can pass on to consumers without driving them away.

Earlier this month, Outback announced the continued expansion of its roster of college athletes, adding 12 basketball stars to its TeamMATES program. The promotion helps raise funds for the American Cancer Society. And  it gives fans a shot at winning a “fan cave” renovation valued at $10,000.