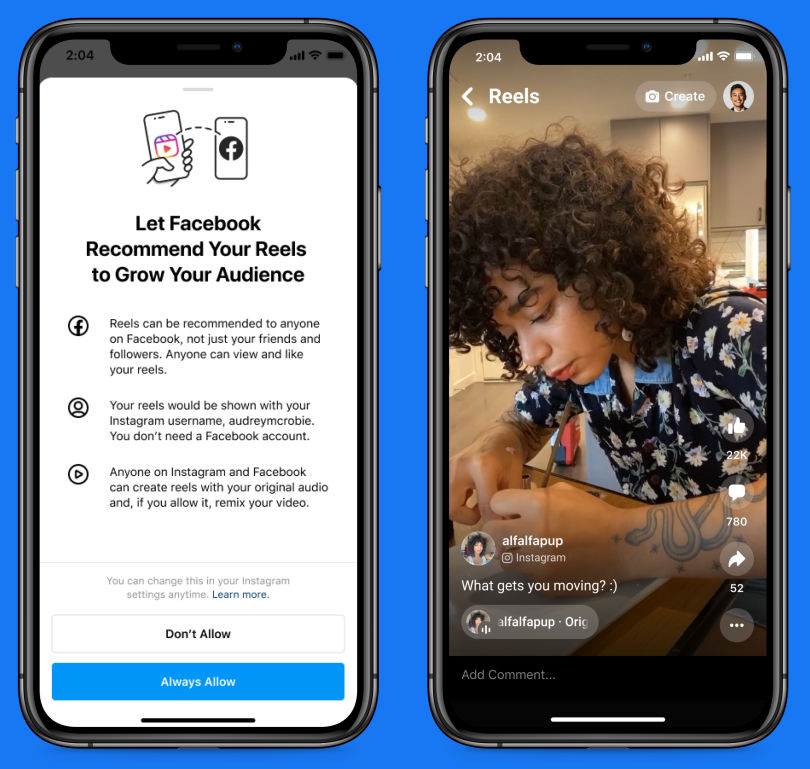 When Reels launched on Facebook in September 2021, just one year after they debuted on its sister company, Instagram, TikTok had already shown the importance of the 60-second video to the future of social media. Now, Reels are Meta’s fastest-growing content format.

By expanding Facebook Reels to over 150 countries on iOS and Android -- and by doubling Reels’ duration and time limit from 30 seconds to 60 seconds -- Meta is directly competing with TikTok, which says it has over 1 billion monthly active global users.

Creators will soon be able to save drafts of their Reels and use a number of unreleased video-clipping tools.

Meta says it will roll out full-screen and immersive ads that play between Facebook Reels worldwide over the coming months. Users will be able to comment, like, view, save, share, and skip these ads, as they would organic content on the platform.

Meta is also introducing additional editing features to Facebook Reels. This includes “Remix,” which allows influencers to run their own Reels alongside existing publicly shared Reels, featuring much of the other Reel’s content they desire.

Since Facebook rebranded as Meta just five months ago, it has lost $500 billion in market value, bumping it out of the world’s top 10 most valuable companies. And after reporting Facebook’s first-ever user drop in its 18-year history, Reels may be its only means of remaining relevant to younger users.

Targeting influencers is another crucial step in gaining traction in the growing creator economy. Last July, Meta announced that it would be investing $1 billion in creators across Facebook and Instagram in 2022.

This incentive included the Reels Play bonus program, which pays eligible creators up to $35,000 a month depending on how many views their Reels receive. Zuckerberg says that in the coming months, Facebook will also expand the program to more countries, but did not provide more specific details.

With regard to “helping creators earn meaningful income,” according to a statement, Meta is also building new direct monetization options for Facebook Reels through ad-revenue share and fan support. It is expanding tests of Facebook Reels Overlay Ads to all creators in the U.S., Canada, and Mexico, “and to more countries in the coming weeks.”

According to a statement, any creator who is a part of Facebook’s in-stream ads program in the U.S., Canada, and Mexico is automatically eligible to monetize their publicly shared reels with ads. By mid-March, these tests will expand to all countries where in-stream ads are available.

Ads will take on two non-interruptive formats: banner ads and sticker ads. Banner ads will appear as a semi-transparent overlay at the bottom of a Facebook Reels, and sticker ads will be a static image placed anywhere on a creator’s Reel.

Lastly, Zuckerberg’s announcement mentions the placement of Reels in new locations on the Facebook platform. In the coming weeks, Reels will be available in the Watch tab, at the top of users’ Feed, and shareable to Stories. Facebook will also begin suggesting Reels to users through their Feed in select countries.