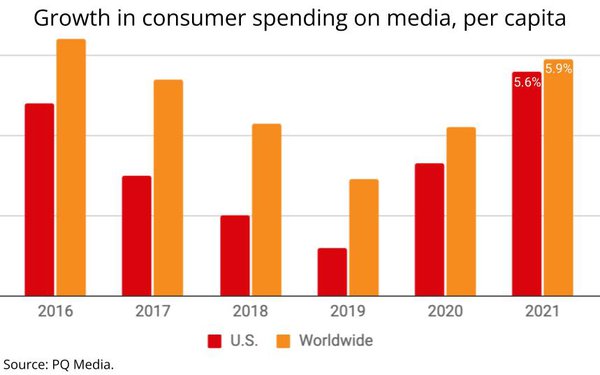 After slowing in recent years, growth in consumer spending on media accelerated through the COVID-19 pandemic, reaching recent highs in both the U.S. and worldwide in 2021, according to the just-released edition of PQ Media's "Global Consumer Spending on Media Forecast."

U.S. consumers accounted for nearly half of that, as domestic consumer spending on media content and technology rose 6.4% to $500.6 billion in 2021.

“While the overall gain in consumer media and technology spending in 2021 was a strong acceleration from the 4.7% increase in 2020," explains PQ Media CEO Patrick Quinn, adding: "we expect growth to begin decelerating in 2022 and lose even more steam during the 2023-2025 period, as many of the pandemic-triggered forces that sparked the consumer spending surge in 2020 began to fade in the second half of 2021."

“Our research indicates the pandemic briefly interrupted key secular trends in 2020 and 1H 2021," he continues, noting that it "was simply a short-term disruption of long-term patterns that have resumed in 2022 and will continue through 2025.

That makes sense, given the increases in per capita spending by average consumers in the U.S. and worldwide.