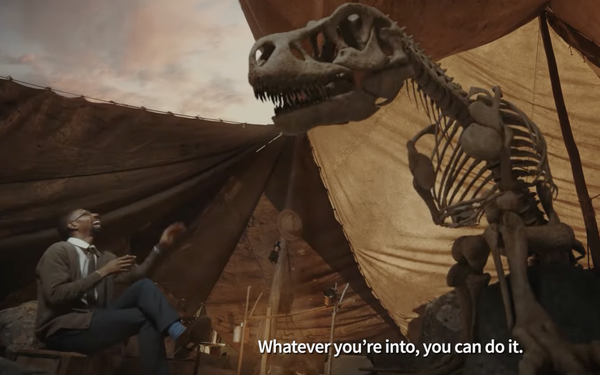 A man is eating lunch when his sandwich catches his attention. The sandwich is talking, sharing with him an inspirational message: “You can do anything.”

The sandwich then suggests that he can get a master’s in public health from the University of Michigan, and the man gets up and waves goodbye to his coworkers.

What follows next in this spot for online learning platform Coursera is a montage of the man receiving his master’s and posing for a magazine cover. The ad then suggests getting a Python certificate from Google, taking some paleobiology courses and spending" a little quality time with dinosaur bones.”

When the narrator suggests “Let’s rise to our giant goals and fly!,” the man is shown getting up from his desk—the previous was all in his imagination—and he looks at the Coursera app on his phone.

A second ad features a woman who has been taking classes from Yale in her bedroom and earned a certificate from Google during “a crowded, slightly stinky 10-hour train ride.” Callen, Austin, Texas, handles.

The effort comes as Coursera recently reported its revenues for 2021 grew 41% year-over-year to $415 million.