A History Of Violence: A Lifetime Of War On TV 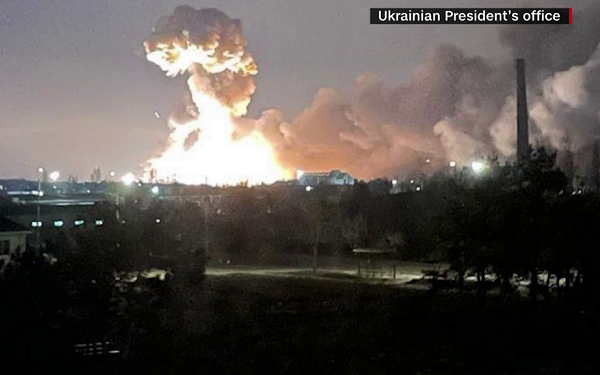 It all seems so familiar -- missiles streaking across the sky followed by the sounds of explosions and the sight of smoke billowing from cities under attack.

TV reporters on the cities’ outskirts point skyward, cringe when the bombs strike and describe what they are experiencing in voices raised to be heard over the din of war.

We have seen it all before. And now, another televised war has started this week, evoking memories of all the other ones.

People my age were children in the 1960s when the Vietnam War was brought vividly into our homes on the evening news.

That conflict is considered to be the first war on TV. After that, it took roughly 20 years for the arrival of a new era in which wars could be beamed into our homes in real time.

That era can be said to have begun in 1991, with the nighttime bombing of Baghdad that marked the beginning of Desert Storm. We were riveted to our televisions, but also shocked and awed.

And here we are again -- the clamor and chaos, the sound and the fury of a war on television. And this one is just beginning.

For those preferring to take a longer view of the use of moving pictures to document the nasty business of making war, the technology for doing so reaches back at least to the First World War.

In the Second World War, motion-picture cameras were everywhere -- from the beaches of Normandy and the Pacific Isles to the concentration camps of Eastern Europe, where the atrocities of the death factories were filmed for posterity by the Nazis themselves.

The technology we have today makes it all seem so much more immediate. Now we watch events accelerate as they unfold.

We feel the chaos of war because the tone and texture of the real-time reporting we are absorbing is itself chaotic.

One minute, Ukraine is a thriving little country filled with ordinary people going about their business, and the next minute, those same people are running for their lives as the world around them crumbles to the ground.

And TV is there with its brave reporters on the front lines cringing as the bombs drop and showing the rest of us what the face of war really looks like.

This new war on TV, like the others that so many of us have seen before, is another one of those rare occasions when the technology of television is applied for the purpose for which it has always been uniquely suited -- to take us places where we cannot go ourselves, and to reveal to us in bad times or good the world we live in.

europe, news, russia, television
1 comment about "A History Of Violence: A Lifetime Of War On TV".
Check to receive email when comments are posted.
Next story loading