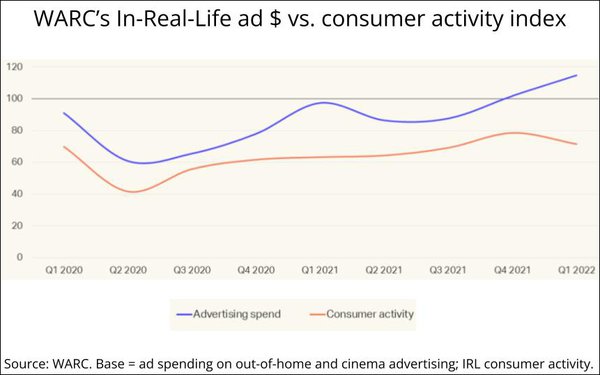 At a time when the world seems increasingly torn between virtual and actual realities, a well-known publisher of ad industry data has defined a portion of the ad economy as being "IRL," as in the internet slang acronym for "in-real-life."

“Consumers live increasingly digital lives,"explains Alex Brownsell, head of content at WARC (World Advertising Research Center), in a statement releasing a new analysis dimensioning the IRL ad economy. "People are more likely to work from home and shop online. Brands are preparing for a future dominated by virtual interactions in the metaverse. However, it’s vital that marketers do not neglect those all-important physical moments between our digital experiences."

WARC, which is a research publishing division of Ascential plc, apparently defines the "real world" as the parts represented by physical place-based media such as out-of-home, cinema, etc., even though much of the advertising in those venues is increasingly becoming digital -- and even augmented reality versions of digital -- as well as consumer experiences such as "commuting, in-person socializing and in-store shopping."

The new WARC report, which was authored by Brownsell, estimates "in real life" ad spending will reach $44.4 billion this year, which presumably is the combined total for its estimates for out-of-home and cinema advertising worldwide.

The report also includes a nifty index plotting the "in-real-life" ad economy's recovery since the beginning of the COVID-19 pandemic (see above), and provides explicit global growth estimates for total ad spending, and for out-of-home and for cinema advertising.

WARC's release did not disclose what the not-in-real-life ad economy currently is, but based on its previous global ad forecast estimates for 2022, it would be about $823 billion. Really.