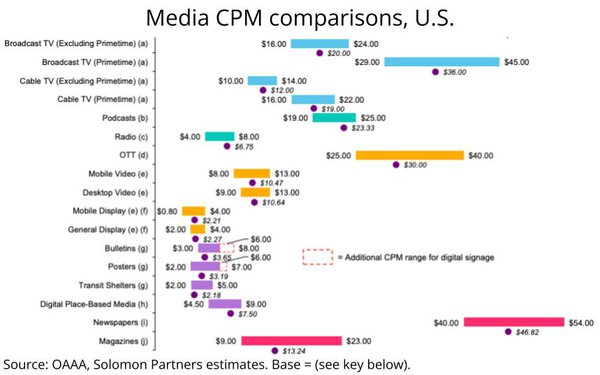 With median CPMs in the two-dollar range, digital display and out-of-home transit shelter ads), are the most cost-efficient of any major advertising media, according to a new analysis being released by the Out-of-Home Advertising Association of America (OAAA).

The analysis, which was conducted by financial advisory firm Solomon Partners, is derived from publicly traded media company Securities and Exchange Commission filings, news reports, “research and other industry sources” as of January of this year. It reveals a remarkable range of advertising costs, within mediums, as well as across the overall major media landscape (see chart above or click here to access the PDF).

With a median CPM of $46.82, print newspaper ads are the most expensive medium overall, according to the analysis, followed by prime-time broadcast TV’s median CPM of $36.00.

Interestingly, the data dispels the notion that OTT (over-the-top television) currently has the most expensive CPMs, although with a median CPM of $30, it isn’t far off. The analysis did not explicitly cover breakouts for CTV (connected TV), streaming services, etc., which are purported to also be on the high-end of ad costs, but it also dispels that other forms of digital video (desktop video at $10.64 and mobile video at $10.47) currently are among the most expensive media buys.

The report did not cover social media advertising costs.

While the release clearly establishes that out-of-home media is undervalued by Madison Avenue, it does not explicitly explain why, although industry experts have historically indicated it’s because of legacy media pricing models.

The report shows out-of-home media ranging from transit shelters on the low-end to digital place-based media buys on the high end ($7.50 median CPM).

“This research affirms out-of-home’s critical role in the media mix,” OAAA President and CEO Anna Bager said in a statement, adding: “It verifies the value that out of home brings to marketers at a time when people are not only emerging from the pandemic’s restrictions to venture out, but also noticing OOH ads more than before the crisis. Couple that with the other benefits spotlighted by Solomon Partners, and I expect to see OOH taking a bigger bite out of brands’ ad budgets.”

The Solomon report also draws on a previous analysis indicating that out-of-home media delivers “the greatest ad recall” among the major ad media.

“These benchmarking numbers clearly show that OOH provides significant return-on-investment and marketers should consider that reach-per-dollar in their media plans,” Solomon Partners Managing Director and Head of Marketing and Media/Tech Services Group Mark Boidman stated, adding: “Moreover, OOH has greatly improved its reporting and attribution accountability and, at the same time, programmatic digital out of home is skyrocketing – all appealing to today’s brands.”