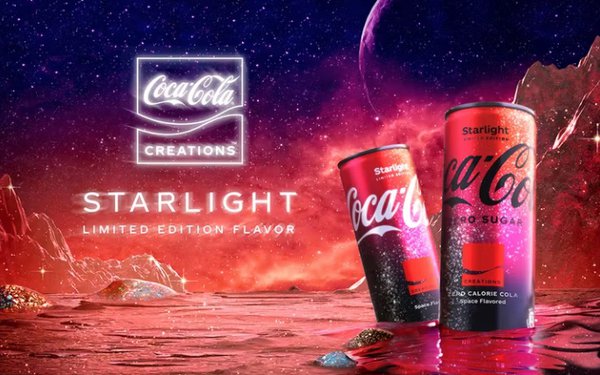 For Coke and Pepsi, 2022 is a gateway to imagination—and reimagination.

In the case of Starlight, imagination comes in the form of augmented reality. Scanning a bottle or can affords access to a “private concert” featuring American singer/songwriter Ava Max.

Further, Starlight “combines great Coca-Cola taste with a dash of the unexpected, including a reddish hue,” with notes “reminiscent of stargazing around a campfire," the company claims.

Labeled a “draft cola,” Nitro Pepsi taps a technique used by beer and coffee marketers to infuse beverages with nitrogen via a widget inside the can—producing a creamy texture with fewer bubbles.

As seen in this video from the Pepsi in-house studio Creators League, the end result resembles Guinness draught stout far more than it does soda pop.

A Pepsi rep says Nitro Pepsi was developed “to address a common barrier for people, spanning demographics, who don’t typically drink cola: the larger bubbles and carbonation found in most sodas.”

While the beverage should appeal to many different consumer groups, it could resonate particularly well with younger generations that have not embraced carbonated soft drinks, according to Lu Ann Williams, co-founder of Innova Market Insights and the company’s global insights director.

“For those kids like me, who have never embraced a lot of carbonation—I used to add water to my drinks—this might be a texture that turns them into a [carbonated soft drink] consumer,” Williams tells Marketing Daily. “Nitro Pepsi is a great example of an amplified experience.”

The product also seems to reflect global trends in consumer preferences in food and beverages.

In a survey Innova conducted last year in Brazil, China, France, Germany, India, Indonesia, Mexico, Spain, the United States and United Kingdom, more than 50% of respondents said that post-pandemic, “I want to be more adventurous with my food and beverage choices.”