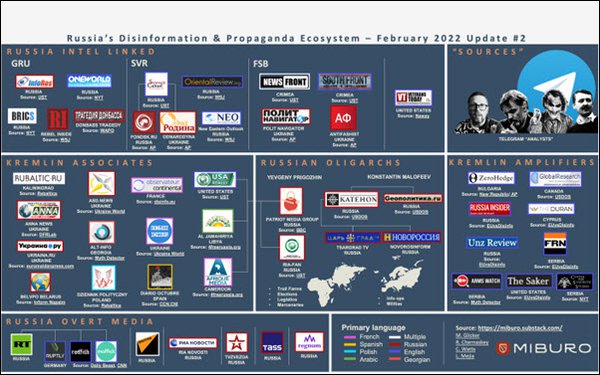 A chart on the Miburo site/newsletter by Max Glicker and Clint Watts, showing Russia's disinformation and propaganda ecosystem.

Hendrix asks readers to consider an analogy to the lead-up to World War II.

“Imagine it is September, 1939. Germany has invaded Poland on the false premise that Poland has joined with Britain and France in a bid to attack it... Imagine there is a set of major publishers based in the United States who channel Hitler’s propaganda campaign across the globe, including to a substantial American audience... Imagine that every official and government entity loyal to Hitler also has a deal with these publishers, and their own means to easily reach a global audience instantly... That is the situation Google, Facebook, Twitter and other U.S. tech firms are faced with right now, as they host, distribute, amplify and in some cases help monetize Vladimir Putin’s propaganda outlets– including Russian state media that are already registered as foreign agents, as well as the official accounts of Putin’s government and its officials.”

“Would you demand those publishers pull the plug on Hitler, or would you defend the German state’s right to some confused notion of 'free speech,' even as Hitler sets out to destroy the lives of millions?”

Hendrix argues that it "is time for Mark Zuckerberg, Sundar Pichai, Parag Agrawal and other Silicon Valley leaders to choose sides, and to suspend these accounts until Russia ceases its attack and withdraws from Ukraine... This is war — and the lies and falsehoods that the Russian state media and Putin’s officials will share in the next days across American social media platforms are weapons intended to legitimize the Kremlin’s brutality, divide Ukraine’s allies and diminish any potential opposition.”

Hendrix and tech entrepreneur Bryan Jones founded the nonprofit Tech Policy Press, which publishes analyses and opinions addressing “the intersection of technology and democracy.” The site states that it is funded by the founders and “small donations from individuals.”

Those include an expose in the Insider documenting how Google and major brands are continuing to fuel sites that amplify Kremlin propaganda; a piece in The Guardian detailing how Facebook and other platforms continue to allow for-profit misinformation networks, usually monetized by ads, to operate; and an analysis in Popular.Info of how an obscure, right-wing website called Conservative Brief, repeatedly cited for publishing false claims, has been able to dominate Facebook traffic through a network of right-wing Facebook accounts with large followings, such as one used by conspiracy theorist Dinesh D'Souza.