Or: How Putin Learned To Stop Worrying And Love The Bomb 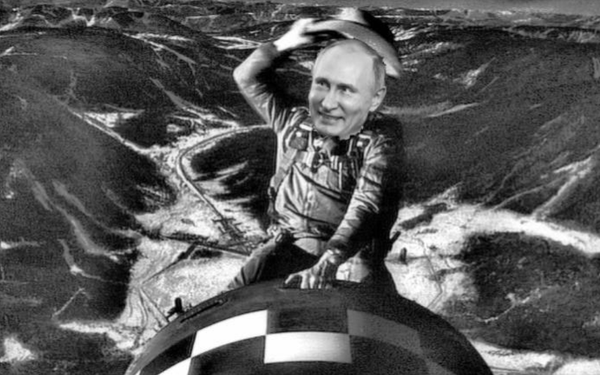 "Russia remains one of the most powerful nuclear states. Moreover, it has a certain advantage in several cutting-edge weapons. In this context, there should be no doubt for anyone that any potential aggressor will face defeat and ominous consequences should it directly attack our country.”

That statement by Russian President Vladimir Putin, as his troops were invading Ukraine, demonstrates the greatest armament at his disposal isn't nukes, but his ability to weaponize information to intimidate others.

For proof, type the keywords "Putin," "Ukraine," "nuclear" and "threat" into Google News and you'll see a result of 40 million references in 0.65 seconds, which ironically is about the same amount of time it would take him to launch a nuclear war.

Unless he's truly lost it, it's unlikely he would use Russia's vast nuclear stockpile -- even the so-called "tactical" battlefield nuclear weapons, he's said he would, if necessary in the past -- because he's not crazy, right?

He's acknowledged that a nuclear war is not "winnable" in the past, so unless he's planning to lose one, the only logical reason for him to invoke the N-word is part of a cold calculation that having others think about the unthinkable is just as powerful, pragmatically speaking.

The expertly trained former KGB agent is perhaps the world master of psyops, and if recent history is any indication, he usually wins the media war.

I hope I'm right, but when you use words like that while missiles are actually flying and troops and tanks are mobilizing, it's a little harder to ignore the potential reality that even if he didn't intend to, things could escalate rather quickly.

So in an effort to help contain it, let me try to provide at least one of the things I believe Putin wants to achieve: respect.

We've already given him one MediaPost award -- our 2017 "Media Disruptor of the Year" award for his clandestine media campaign influencing the outcome of America's 2016 presidential election.

It was brilliant, Vlad. As is your current media campaign. You are awesome, and if you stand down, I promise we'll give you another one very soon.

Meanwhile, I can tell you you've already won the Ukrainian media war, because I just received some data proving it.

Total Coverage Rankings Of World Leaders About The Ukraine Invasion:

So you rock. No need to let ballistic rockets fly. Please stand down. Unless you want to be remembered as, well, you know?

And on that note, I have to tell you that while you're winning the media war, the sentiment surrounding your campaign can, how shall I say, use a brand refresh. I mean, you're doing worse than even Biden. Which is kind of ironic, given how much you're continuing to work in your mysterious ways to undermine his sentiment.

Top 5 leaders With The Worst Sentiment:

campaigns, data, keywords, media, politics, russia
3 comments about "Or: How Putin Learned To Stop Worrying And Love The Bomb".
Check to receive email when comments are posted.
Read more comments >
Next story loading