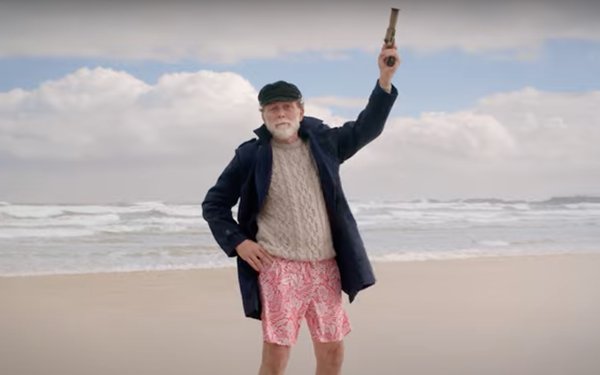 The campaign is from Walrus and stars a salty, gritty old sea captain. He’s full of horror stories about bathing-suit chafing and the ravages of salt, sand and aggravating mesh on men’s private parts.

The campaign focuses primarily on the comfort of the company’s fabric, with a slight nod to its sustainability -- its products are made entirely from recycled plastic bottles. “Have you seen what chafing does to a man?” the sea captain asks in one 30-second spot. “Oh, the rubbing,” he laments in another.

“The idea is to introduce Fair Harbor as a family-friendly lifestyle brand,” says Caroline Danehy, chief creative officer at Fair Harbor. “We want to capture people’s attention as fun, welcoming and optimistic. And we wanted to do it with a character that everyone in the family can relate to.”

She and her older brother Jake launched the company in 2014 when she was a senior in high school, and he was a junior studying sustainability at Colgate University.

“We grew up going to Fair Harbor on Fire Island, and it’s my favorite place on earth,” she tells D2C FYI. “It’s super-minimalistic living -- basically a glorified sandbar, with the bay on one side, the ocean on the other, and no cars. And as we grew up, we saw more and more trash washing up on the beach.”

The mission is “to help people enjoy the places they love while protecting them at the same time.”

Fair Harbor is currently the fastest-growing sustainable beachwear company in the U.S. and says that so far, it has transformed some 26 million plastic bottles into beachwear.

Danehy says the process starts in China, where a textile factory takes post-consumer plastic bottles, turning them into thread for its BreezeKnit fabric.

The campaign is airing on national TV, running on ESPN, Food Network, truTV, VICE, and Comedy Central. It also includes out-of-home and radio.

The D2C brand sells its products in Nordstrom, Saks Fifth Avenue and many specialty retailers, and is expanding its wholesale business. Danehy believes the new campaign will boost sales in both physical and digital channels.

And while the ads focus on the company's men’s board shorts, its core product, Danehy says it’s been exciting to finalize the new women’s line, with plans for the 25-piece collection to debut in April.

“It’s been a long time coming,” she says.

It’s frustrating that women often have so few choices for active beachwear, she notes. Athletic wear is comfortable, but too slow-drying to swim comfortably in. And while bathing suits dry fast, they’re not made for running.

“I’ve never had a female board short I’ve enjoyed wearing,” she says. “I wanted to fill the need for athletic wear women can work out in, swim in and go for coffee in.”

The collection “takes all the technical and innovative aspect of our men’s wear and applies it to women,” Danehy says. “The fabric is soft, forgiving and functional.”

With two inseam lengths, the shorts either have a built-in boxer brief or an underwear liner. “These smaller details will make women more comfortable at the beach,” Danehy adds.

It helps that 55% of the company’s customers are women, shopping for the men in their lives.