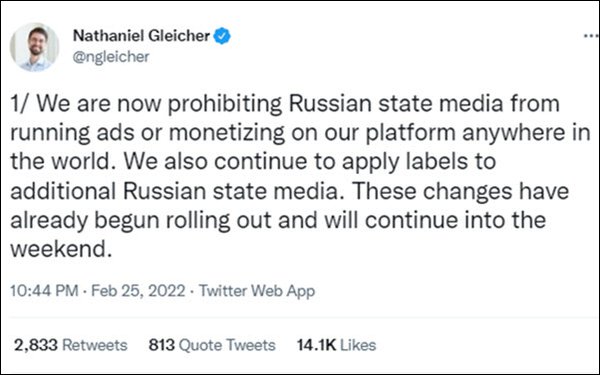 Responding to growing criticism of their continued monetization of Russian channels in the wake of Russia’s Ukraine invasion, the big platforms are now suspending such advertising and taking some steps to reduce access to known disinformation channels.

Facebook’s head of security policy, Nathaniel Gleicher, tweeted (above): “We are now prohibiting Russian state media from running ads or monetizing on our platform anywhere in the world. We also continue to apply labels to additional Russian state media.” He also said that Facebook and Instagram were taking steps to protect Ukrainian users' identities.

Twitter also announced a number of steps to “reduce the spread of abusive content” and prevent the takeover or manipulation of “vulnerable, high-profile” accounts, including journalists, activists, and government officials and agencies.

On Saturday, YouTube spokesperson Ivy Choi said the platform was “pausing a number of channels’ ability to monetize on YouTube, including several Russian channels affiliated with recent sanctions. We will be significantly limiting recommendations to these channels. And in response to a government request, we’ve restricted access to RT and a number of other channels in Ukraine. We will continue to monitor new developments and may take further actions.”

YouTube also said it had recently blocked hundreds of channels and thousands of videos that violated its policies, including channels engaged in coordinated deception.

YouTube parent Google followed on Saturday. “In response to the war in Ukraine, we are pausing Google monetization of Russian state-funded media across our platforms," the company said in a statement. "We're actively monitoring new developments and will take further steps if necessary."

The platforms have been labeling posts by Russian state media for some time, but Russia is stepping up its attempts to deter them from applying anti-misinformation policies to content reaching its country.

On Friday, the Russian government said it will partially restrict Facebook access in the country, claiming that the platform had “violated the rights and freedoms of Russian citizens” by censoring Russian media outlets.

Nick Clegg, Meta’s newly anointed president of global affairs, said the company had refused to cave to Russia’s demands that it stop independent fact-checking and labeling of four Russian outlets. "Ordinary Russians are using our apps to express themselves and organize for action,” he said. “We want them to continue to make their voices heard, share what's happening, and organize."

On Friday, Senator Mark Warner (D-Virginia), chairman of the Senate Select Committee on Intelligence, sent letters to the heads of all of the major tech platforms urging them to take steps to ensure that people in Ukraine can receive emergency messages from public safety organizations, while also removing fake content associated with Russian propaganda operations.