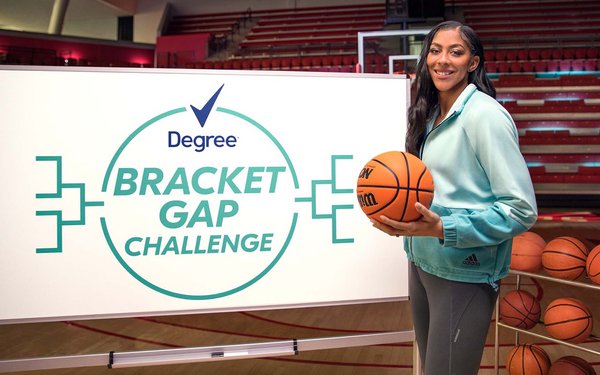 With fans and advertisers alike jonesing for the start of March Madness, Degree deodorant is looking to boost love for the women’s tournament, too.

The Unilever-owned brand is launching “The Bracket Gap Challenge,” encouraging fans to fill out a women’s bracket this year, too.

The campaign stars none other than Candace “Ace” Parker, of the WNBA’s Chicago Sky -- arguably one of the greatest basketball players ever.

This year marks the first time the NCAA has allowed women to use the March Madness name, and Unilever, which owns Degree, says the bracket challenge is another step toward gender equity in sports.

"Investment in women's athletics has come a long way over the last few years, but we're not done advocating for equity yet," says Desi Okeke, director of Degree North America. "We know that more-engaged fans ultimately leads to more recognition for the athletes, and the hope is that the Degree Bracket Gap Challenge will help raise awareness for the next generation of women's college basketball players and motivate girls across the country to stay in the game."

Brackets for the men’s division are a big deal. Unilever cites Nielsen research that in 2015, 40 million people filled out 70 million brackets, with an estimated $9.2 billion in office pools on the line.

According to the brand's research, far fewer fans -- an estimated one in 11 -- have done so for the women’s games.

For marketers, easing the heartbreak of broken brackets is a time-honored tradition. The NCAA says the odds of filling out a perfect bracket are roughly one in 9.2 quintillion for those using the coinflip method.

For people who know a little about the game, odds are narrowed to one in 120.2 billion.

For the Degree challenge, fans can fill out their brackets between March 13 and March 18, when the first game airs. One winner, chosen randomly from the top 10% of entrants, gets $25,000 for themselves and can tell Degree which athletic program team they’d like to receive a $75,000 donation.

Parker has also repped Adidas throughout her career, including appearing in its “Impossible Is Nothing” campaign and developing her own line for the athletic giant.

Ad time for the men’s games, airing on CBS Sports and Turner, is virtually sold out.