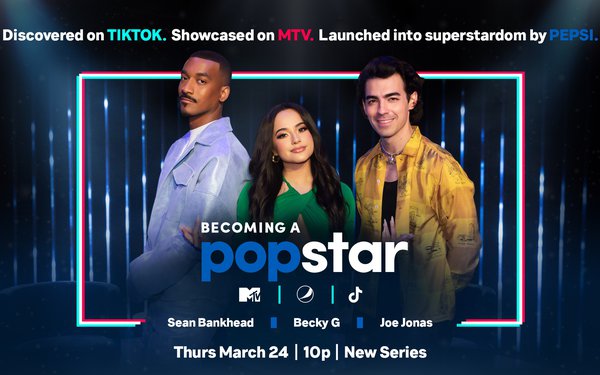 Pepsi is uncapping another serving of original-entertainment content in a collaboration with MTV and TikTok.

Debuting March 24 on MTV, “Becoming a Popstar” is what Pepsi describes as “a modern day reimagination of television’s music competition genre.”

The five-episode series will feature eight contestants competing for the opportunity to win financial assistance and star in a Pepsi commercial that will run during the MTV Video Music Awards on June 5.

Discovered on TikTok, the contestants will be judged by singers Joe Jonas and Becky G and actor Sean Bankhead.

Each week, the contestants will create original songs and accompanying music videos that will air first on the video platform.

TikTok users can vote for their favorite videos via the TikTok app. The winning artist each week will score a cash prize from Pepsi—in addition to the eventual grand prize consisting of the commercial and “funding and resources to help take the winner’s career ambitions to the next level.”

Leading up to the premiere of “Becoming a Popstar,” versions of this trailer “are expected to run on television across the Paramount family of television networks—including MTV, VH1, Comedy Central and more,” a Pepsi rep tells Marketing Daily.

A year ago last month, Pepsi began sponsoring the trivia game show “Cherries Wild,” which debuted then on Fox

According to data from Nielsen, “Cherries Wild” had the lowest ratings among the 11 non-scripted shows on Fox in the 2020-2021 season—with an average of 1.2 million viewers and a 0.29 rating in the 18-49 demographic.

The highest ratings went to “The Masked Singer,” which averaged 6.6 million viewers, and had a 1.7 rating among viewers 18-49.

As of today, “Cherries Wild” had not been canceled or renewed.
beverages, cable tv, carbonated beverages, cpg, social media, tiktok
Next story loading