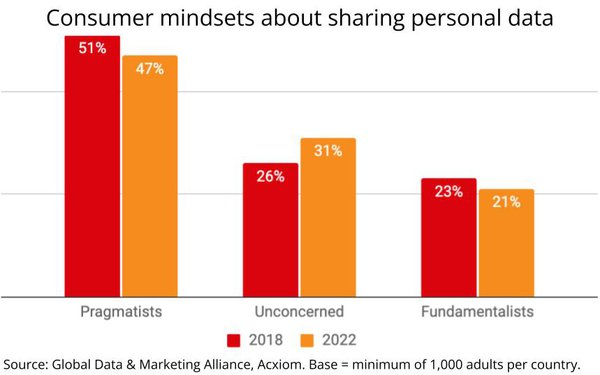 Four years of government regulations, media coverage about consumer data self-sovereignty, and a global pandemic have had a material effect on the way most people think about the ownership and right to trade their personal data with business, especially media platforms and marketers. That's the top finding of an extensive study conducted by the Global Data & Marketing Alliance (GDMA) and Interpublic's Acxiom unit in major countries in 2018 and this 2022.

Based on like-for-like comparisons among consumers in 10 countries surveyed in both years (the 2022 survey was also expanded to include consumers in six additional countries), the study found a marked increase in the percentage of consumers who now deem themselves "data unconcerned," meaning those who have "little or no concern about their data privacy."

Conversely, the percentage of consumers who consider themselves "data fundamentalists" -- meaning that they are unwilling to share their personal information -- declined two percentage points to 21%.

Data pragmatists -- consumers who say they are "happy" to share their data with businesses so long as there is a clear benefit -- also declined by four percentage points to 47%.

While the study has many nuances that could be interpreted relatively, the overall conclusion is that there has been an appreciable mindset change among consumers when it comes to sharing their data in most countries, and it leans into the advertising, marketing and media industry's shift toward a variety of "consumer consent" models for acquiring their "first party" data in order to target them -- as well as lookalike cohorts of like-minded consumers -- better.

“While some media reports would have us believe people are more worried than ever before, the reality is more people are getting familiar with data and technology and in return concern is falling," Jed Mole, CMO of IPG's Acxiom, Kinesso, and Matterkind units, asserts in a statement released with the report.

"Not to say we can relax," Mole adds, "Indeed, to the contrary, we need more engaged and pragmatic minds around data. So, while people have less concern than before when it comes to data matters, it matters greatly that we collectively work to understand how people think, so that we may help them have a balanced view of this amazing digital age and how it works for people.”

The study does not seek to explain why consumers have changed their views about exchanging their data with businesses, or if it's because they have become more educated or simply worn down by the complexity of changes in data, technology and media, but the report's authors do allude to cultural and generational shifts attributable to the pervasiveness of ad technology.

"It seems clear the growing generations of people who are used to data are having an effect, but the ad tech industry must continue to find an answer to an axiomatic message that is rooted in this foreword: people still don’t see themselves benefiting from data as much as companies do," Mole writes in the report's introduction.

Perhaps one of the most telling sections has to do with consumer perceptions over the ownership of their data. And while the overall trend appears to be that consumers worldwide increasingly view their personal data as their own property that they can trade explicitly with businesses, that view actually declined five percentage points in the U.S. between 2018 and 2022. The Netherlands, which fell two percentage points to 66%, was the only other nation where consumers are backing off that perception. 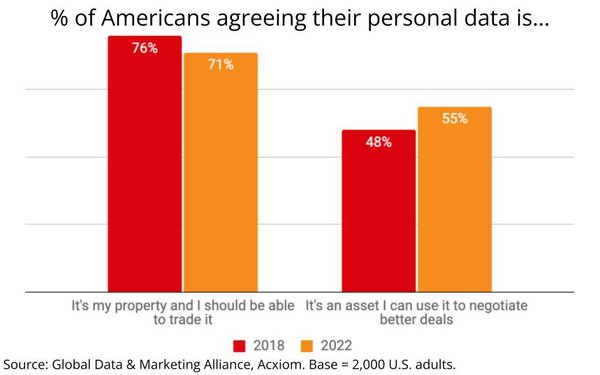 Not surprisingly, free or discounted access to media services -- including streaming, social media, email and messaging apps -- are among the services consumers increasingly are open to exchanging their personal data for (see chart below).

"A consumer capitalist mindset has continued to advance across global markets," the report notes, which is ironic since some of the data and technology industry's biggest critics have labeled many of the most sophisticated data-based marketing tactics "surveillance capitalism."

"The vast majority of consumers across markets agree that their data is their property and that they should be able to trade it if they wish, with 74% agreeing with this statement across the 16 global markets," the report concludes, adding: "Such attitudes are particularly pronounced in emerging markets like Brazil and India where agreement reaches 80% and 84% respectively. Moreover, there has been a slight rise in agreement within the 10 trended markets, with those who strongly agree rising from 23% in 2018 to 26% in 2022. The most notable increase in such sentiments is in Argentina where agreement has risen from 69% in 2018 to 77% in 2022."