White Claw Goes 'Surf'-ing, But Not At The Beach 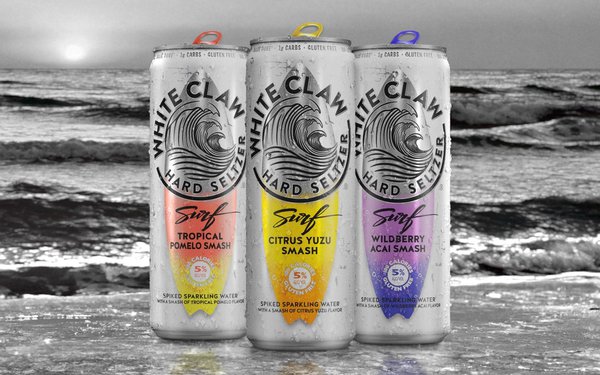 The Mark Anthony-owned brand, however, doesn’t want consumers to think they must visit an ocean beach to enjoy the Surf.

So White Claw has enlisted professional surfers Ivy Miller, Hunter Jones and Blair Conklin to show that surfing doesn’t have to done at the ocean. In its new VCCP-created "Surf Like No Other" campaign, broadcast TV spots placed by Haworth and social media posts show the trio surfing at such locales as snowy hills, sand dunes, fountains, canals, rivers and lakes.

“Get ready for a  whole new wave of White Claw,” says one :15 spot that extols “the first full-flavor White Claw.”

Asked to explain what makes Surf “full-flavor” as opposed to White Claw’s other offerings, the brand could only boast to Marketing Daily of “exotic flavor combinations… delivering a taste like no other.”

Gerry Khermouch, editor of Beverage Business Insights, explains that both hard seltzers and their non-alcoholic counterparts have traditionally been “very light on the palate, which…c onnotes healthfulness …but can lead to what they sometimes call ‘palate fatigue.’”

As a result, he tells Marketing Daily, beverage marketers are looking for “ways to offer much more robust flavor and mouthfeel.”

White Claw itself introduced hard iced tea seltzers in four varieties last year, but like the 12 versions of original White Claw, each has just one flavor -- e.g., lemon, raspberry, mango, peach  -- as compared to the new Surf combos.

Jones, Conklin and another pro surfer, Ryan Harris, are at SXSW in Austin this week to participate in a White Claw-sponsored panel on the future of surfing. As the official hard seltzer of SXSW, the brand is also hosting a three-day Surf House, where it will serve up not only its newest drinks, but also talk, food and music performances.