'The Batman,' Still Dominant, Adds Another $36.8M In Box-Office Sales 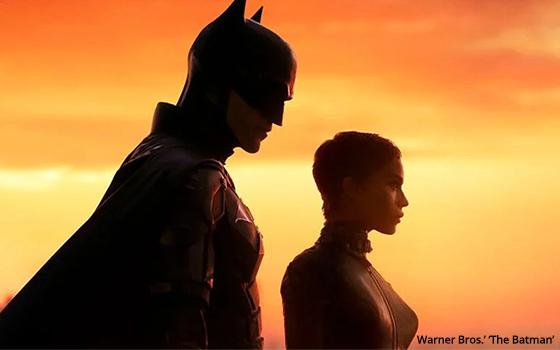 Warner Bros.' "The Batman" continued to dominate in its third week with $36.8 million in North American box-office revenues --- now totaling $300.1 million, according to Comscore.

"The Batman" lost only a "modest" 45% from its previous week, according to Paul Dergarabedian, senior media analyst for Comscore. International box office for "Batman" is now nearly equal to the North American box office at $298 million, with a global total of $598.1 million.

Worldwide, "The Batman" is now in distant second place to another big comic book hero-turned-movie star character still in circulation: Sony Pictures' "Spider-Man: No Way Home" -- which is now at $1.9 billion.

In terms of North American business for the most recent weekend, after “The Batman” comes a new film opening -- "Jujutsu Kaisen O" from Funimation Films -- about a nervous high school student who enrolls in the mysterious Tokyo Jujutsu High School after being haunted by the curse of his childhood friend. It took in a solid $17.7 million -- playing in 2,286 North American locations, according to Comscore.

"The Batman" may have some tougher competition going forward.

Looking ahead over the next two weekends, there will be wide-release films from big movie studios:  Paramount Pictures' "The Lost City" (March 25) and Columbia Pictures' "Morbius" (April 1).

Over the last two weeks, "Lost City" spent an estimated $2.9 million in national TV advertising for 889 equivalized 30-second units with 369.1 million targeted impressions, according to iSpot.tv, followed by "Morbius" with $2.6 million and 268.0 million impressions.

"The Batman" had built-in awareness from previous weeks of national TV advertising -- at $30.2 million in total estimated national TV ad dollars since its campaign began -- with a modest estimated $316,760 for 63.4 million impressions over the most recent 14-day period.