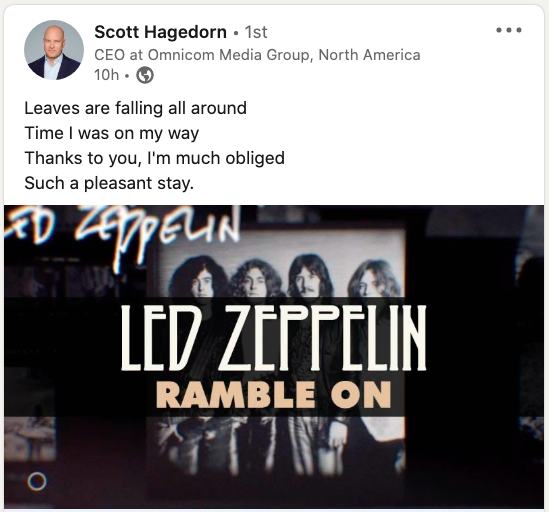 Omnicom Media Group is once again reorganizing its North America management team, following the departure of Scott Hagedorn, who is "rambling on," according to a post on his LinkedIn profile late Sunday.

Hagedorn did not disclose his next move, but he posted a link to Led Zeppelin's "Ramble On," as well as the lyrics:

Leaves are falling all around
Time I was on my way
Thanks to you, I'm much obliged
Such a pleasant stay.

Omnicom this morning confirmed that Ralph Pardo has been named to succeed Hagedorn as North America CEO, and that Hagedorn, a 14-year veteran of Omnicom, "will remain in OMG’s employ through the term of his contract.

The statement did not disclose the term left on Hagedorn's contract, but judging by his LinkedIn posted, it seems to be relatively imminent.

The Led Zeppelin song is an homage to J. R. R. Tolkien's "The Lord Of The Rings," which is an epic fantasy journey.

Hagedorn, who was a rising star inside Omnicom, founding and nurturing its data platforms Annelect and Hearts & Science, before being named North America CEO in February 2019, succeeding long-time Omnicom media executive Page Thompson who retired.

Pardo moves to the CEO role from CEO of Hearts & Science, succeeding Hagedorn in that role in September 2020.

"His successor as CEO of Hearts & Science is expected to be named in the coming weeks," the company said.