Walking On The Moon, Watching The Beatles, Seeing A Sparks & Honey Culture Briefing 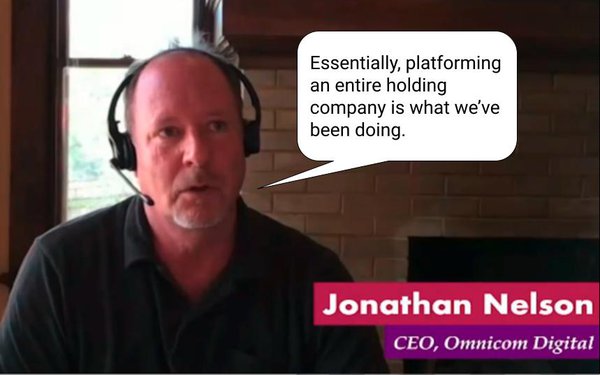 “You know how people talk about how they felt when people landed on the moon, or in 1964 when the Beatles played on ‘Ed Sullivan’? I had a moment like that,” Omnicom Digital CEO Jonathan Nelson said about the first time he sat in on one of Sparks & Honey’s inimitable culture briefings nearly a decade ago.

Nelson, who would go on to lead Omnicom’s acquisition by – and ultimately, its integration into various parts of Omnicom over the next 10 years – was participating in one of a series of briefings Sparks & Honey held last week as part of a celebration of its 10th anniversary.

“I sat in that room and Sparks & Honey, for one hour, talked about culture in a way that I’d never heard it talked about,” Nelson added.

The funny thing is that’s exactly how I felt the first time I sat in on one of its culture briefings almost as long ago. It’s also the way I feel every time I tune in weekdays at noon to watch them these days on its LinkedIn page.

I’ve written about the unique way the Omnicom unit processes, distills and outputs culture in the form of practical insights before. I’ve recommended readers tune in to experience their own moon landing moments themselves. We’ve picked them as our agency of the year, and Omnicom as our holding company of the year for integrating it – especially its homegrown AI assistant “Q” into Omnicom’s broader operating system (Omni), and we inducted Sparks & Honey founder Terry Young as a MediaPost All Star for those very same reasons, but it was somehow reassuring to hear its own team, advisors and owners speak the same say, just to make sure I haven’t just been caught up by the sizzle of the process and knowing there is real substance in those sessions.

Nelson noted how, aside from being a fabulous free-standing Omnicom unit, not to mention one that has successfully enabled the holding company to both move into management consulting, as well as develop a coveted SaaS model, Sparks & Honey has also transformed its parent company.

Aside from the obvious anecdotal examples of the culture briefings themselves, some of it is secret sauce stuff that has to do with the way Omnicom has integrated Q into Omni, and how that has given its organization “super powers” and the ability to “see around corners” in order to identify meaningful trends in culture that have material impact on the worlds of marketing, advertising and media.

Nelson said it’s already transformed Omnicom’s healthcare and PR practices, and that the Q integration into Omni is being activated through its media-buying.

But human passion points aside, he also spoke about it in practical, technical terms.

Asked by Sparks & Honey’s Young to describe the “power of Q” and how it powers “cultural intelligence,” Nelson explained, “I've always thought that computers have a superhuman ability to see patterns and information and to collect data from all over the world… It’s trying to make sense of what’s going on and the world has been and is getting to be a more complex place.”

Nelson went on to describe the integration as “essentially platforming an entire holding company” and “using technology to make the entire company smarter.”

As someone who has had some early first looks at Q and how Omnicom analysts use it to output almost instantaneous insights that can steer its human talent in better directions, I can attest it is an amazing use of technology, and in the good way, not the bad one. It doesn’t use AI to automate or dehumanize the processes that ad people do best. It works as a tool that augments and enhances what people couldn’t do manually by themselves.

I’ve go some of my own personal favorite Sparks & Honey culture briefing lightbulb moments, especially the time they actually turned over a couple of their briefings to collaborate with MediaPost to explore the role of “ethics” in advertising, marketing and media. And dare I say, much of those predictions have come to fruition if you look at the direction big brands and agencies are heading in response to social justice, consumer data and self-sovereignty, misinformation, etc. [My personal favorite still is the culture briefing on QAnon and a variety of conspiracy theories, and how they were impacting marketers, especially when Sparks & Honey analysts explained how QAnon promoters were using game mechanics to recruit people who are just in it for shits and giggles, at least initially.)

I’m not saying Sparks & Honey actually initiated those changes, but it didn’t hurt.

So it was interesting to hear how their own alumni, advisors and others who were part of the team look back and identify what they considered their brightest and shiniest moments.

I recommend you go back and watch those sessions yourself on its LinkedIn channel, but to sum up, they were way ahead of the rest of the industry on things like social justice, DEI, gender fluidity, space exploration, precision consumer data, and a variety of Web3 developments from blockchain to crypto to NFTs to metaverses, as well as gaming and eSports to boot.