Back To The '90s? Mike's Un-Freezes Slushies, Adds 'Hard' Touch 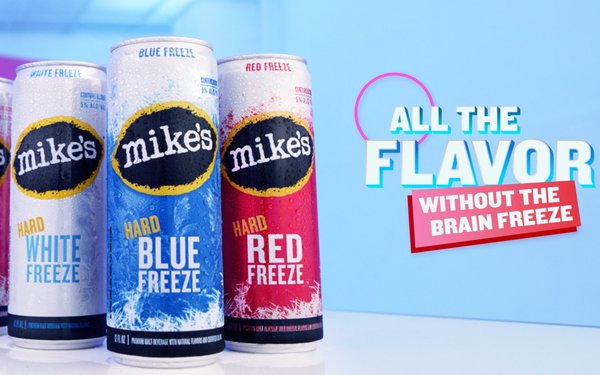 Mark Anthony-owned Mike’s Hard Lemonade is going back to the ‘90s with Mike’s Hard Freeze, a line of four flavors meant to remind drinkers of slushy flavors, launching with packaging and advertising evoking the colors and sounds of the times.

So, if the tagline, “All the Flavor. Without the Brain Freeze” has you wetting your lips, you’re part of Hard Freeze’s target audience.

But is this nostalgia, or as Campari America’s Emily Bibeault pondered during a Drizly webinar on Gen Z drinkers earlier this month, “the need for a simpler time”?

“While slushy flavors are available widely even today, many of our consumers were born between the late ‘80s and ‘90s and have an inherent connection to that decade,” Mike’s Hard Freeze told Marketing Daily. “We’re seeing ‘90s trends across a variety of areas of culture today that resonate with multiple generations of consumers: from popular TV show reboots, to the revival of movie franchises, to the resurgence of fashion.”

Many of the potential users, though, are too young to have actually slurped slushies during the ‘90s.”

“In consumer research”, the brand continued, “Freeze appealed to two out of three 21-34-year-old consumers and was predicted to be 65% incremental to the Mike’s portfolio.”

The oldest of that age group were toddlers when the ‘90s ended.

The Mike’s Hard Freeze campaign, running through the summer, features two Work in Progress-created spots, “Freeze Factory” and “Boy Band,” each in :06 and :15 versions.

Other agencies involved with the campaign include Epsilon for shopper marketing and MSL Group for public relations.