'For Your Consideration' Oscars Promo Ad Spend Up 7%, To Nearly $53M And Counting 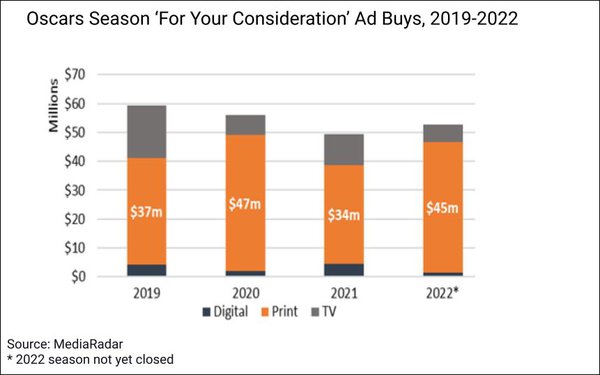 Studios' spending on ads promoting their 2021 films and stars in the lead-up to the March 27 Academy Awards telecast had reached nearly $53 million by March 8, according to cross-platform ad campaign tracking firm MediaRadar, which started tracking this season's ads on Nov. 1, 2021.

There was a 5% year-over-year decline in the 2020 season, expected after a record-breaking 2019 season and the campaigning season in 2020 having been cut short by the onset of the COVID pandemic, according to MediaRadar.

The 12% YoY decrease in 2021’s Oscars season ad spend also wasn't surprising, given that the season reflected movies released during 2020, a year that saw unprecedented movie industry disruption, as the pandemic forced shutdowns of movie theaters in the U.S. and much of the world.

To date, 2022's top five "For Your Consideration" ad spenders, accounting for 73% of total spend, are AT&T, Amazon, MGM, Netflix and The Walt Disney Company.

Since 2019, print has been the dominant medium for these ads, with a share of total spend ranging from 62% to 86%. Periodicals that are read by most Academy voters, such as The Hollywood Reporter, Variety and The Los Angeles Times, tend to get the largest shares of the spending, online as well as in print.

Amazon and AT&T each funneled 58% of print spend to magazines, while Netflix slightly favored newspapers (54% of its total print spend). 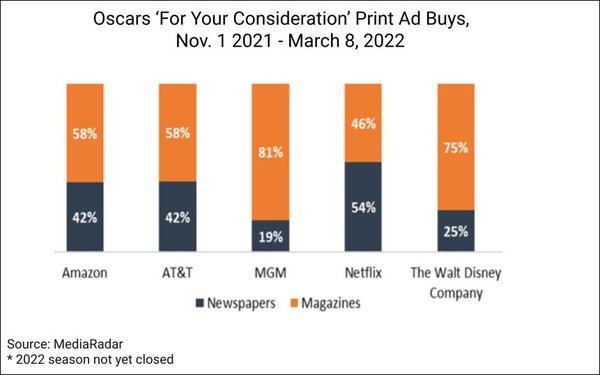