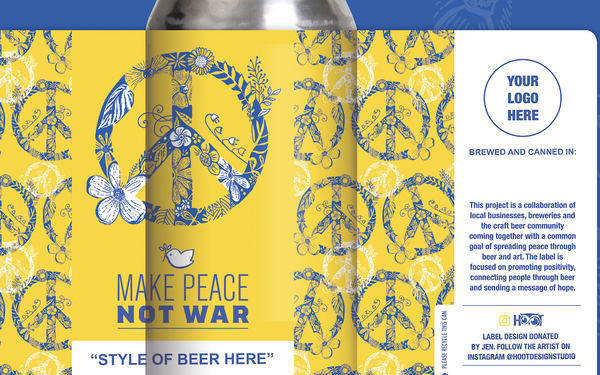 The campaign is a joint effort of EGC Group agency’s Craft Beverage Division, the First Sip Brew Box subscription service, and Hoot Design Studio, who say an additional 10 breweries are in the process of coming on board.

The program allows participants to create a limited-edition beer by adding their brand names, logos and style to the label.

Hoot Design has also teamed up with Blue Label Packaging to print up to 10,000 labels at no charge to the breweries, who only pay shipping costs.

In exchange for the label design, the brewers pledge to donate at least 10% of sales proceeds from their “Make Peace Not War” beers to a charity providing relief to those affected by the Ukrainian crisis. Suggested examples include: Come Back Alive, World Central Kitchen, Red Cross Ukraine, AmeriCares, Heart to Heart International and Open Door.

First Sip, meanwhile, is offering a special $64.99 box which includes no beer but a “Make Peace Not War”-brand T-shirt, artwork, stickers, hat and glassware, with 10% of proceeds going to war relief.

Separately, Ontario’s Tomorrow Brew Co. has launched its own craft beer called Make Peace Not War, this one featuring the V sign hand peace symbol, with 25 cents from each can sold being donated to the Canadian Red Cross to support Ukrainian aid. 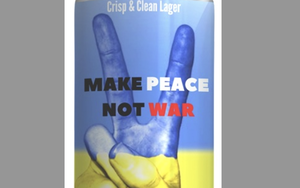 Ian Macdonald, president and co-founder of Tomorrow Brew, said that the company hopes to raise several thousand dollars in the next several weeks through sales of Make Peace, Not War in Canada's LCBO stores.