Netflix Might Generate $1.6B Per Year From Password-Sharing Fees, But At What Cost? 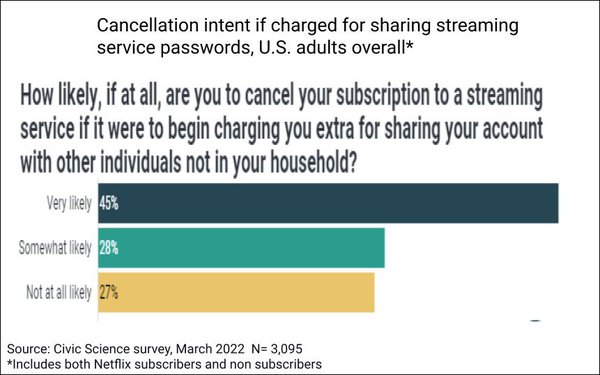 Netflix could earn nearly $1.6 billion per year if it rolls out its plan to charge subscribers for sharing their passwords with those outside of their households, according to an estimate made in a note to investors by Cowen & Co. analyst John Blackledge.

In a blog posted last week, Netflix announced that it's testing password-sharing fees in Chile, Costa Rica and Peru, and indicated that it does plan to roll out such a program.

Blackledge based his estimate on the assumption that half of Netflix’s password-sharing subscribers would begin paying for the service, with about half of those paying sharing fees of about $2 to $3 each, and half signing up for their own paid accounts. That would up the streamer’s projected global 2023 revenue of $38.8 billion by 4%, he projects.

“We think Netflix’s recent efforts reflect a natural progression across more mature markets and could add incremental subs and revenue if the test is rolled out globally,” wrote Blackledge, who estimates that 10% of America’s nearly 116 million broadband homes are accessing Netflix without paying.

But another analyst, Benchmark Co.’s Matthew Harrigan, estimated an incremental revenue lift of under 4%, and warned that the fees could stunt full-member subscriber growth.

Netflix did not reveal the assumptions and test results that led the company to decide that the subscriber cancellations likely as a result of clamping down on free sharing are outweighed by incremental revenue.

Nevertheless, third parties are doing their own research in attempts to try to handicap the plan’s potential for success or failure.

For example, a new survey of U.S. adults from Civic Science (20,000-plus respondents weighted to the U.S. Census) found 23% of Netflix users reporting that they share an account/don’t pay to access Netflix -- far higher than most other estimates, which generally estimate that about 10% to 13% of Netflix subscribers share passwords with non-household members.

Among the 3,095 respondents from the overall sample who have at least one streaming service (not specified) and replied to the question "How likely, if at all, are you to cancel your subscription service if it were to begin charging you extra for sharing your account with individuals not in your household?," fully 45% said very likely, and 28% somewhat likely (chart above). Those 25-34 and 55 plus were somewhat more likely than other age groups to say they would cancel, but only by a few percentage points.

(Note that the question did not specifically ask if respondents had Netflix accounts, or would be less likely to share their Netflix passwords -- a distinction that might well have made a difference in the results.)

Number of streaming services per household also seemed to make relatively little difference. Forty-six percent of those with one service said they’d be less likely to share if charged, versus 47% with four or more, 37% with two and 49% with three.

On the plus side for Netflix, those who said Netflix has the best original programming content were considerably more likely than those who favored Amazon Prime Video or Hulu to say they would be less likely to share passwords if charged — perhaps indicating that Netflix will be able to wean its subscriber base from free sharing. 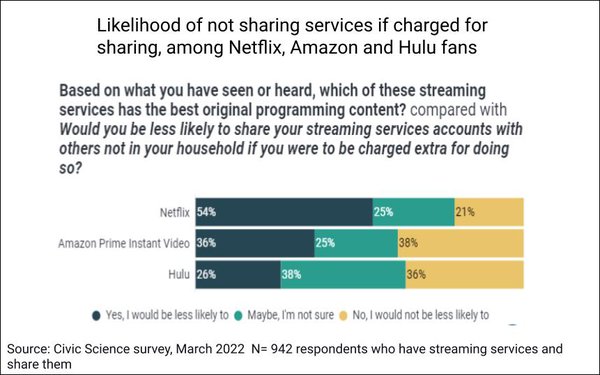 But on the downside, fans of Netflix's original content were also significantly more likely to say that they would actually cancel their accounts if forced to pay for sharing them. 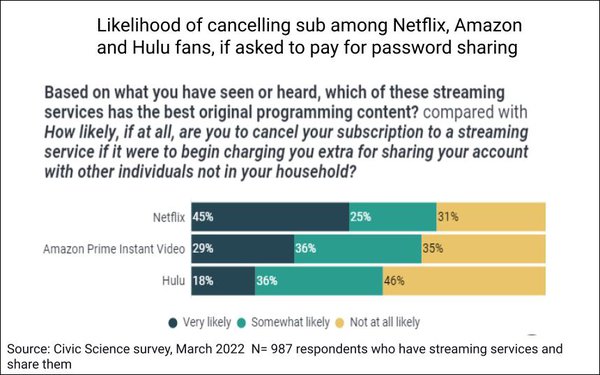