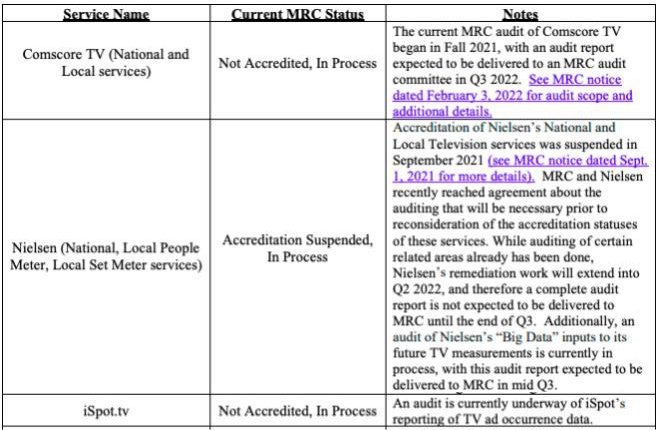 Days after NBCUniversal officially announced it will be using two new unaccredited suppliers as the official "currency" for advertising buys -- iSpot.tv for national and Comscore for local -- the Media Rating Council this morning issued an update on the statuses of various TV audience measurement services currently under its review.

The update, which doesn't announce any change in the overall status -- currently only one TV measurement service is accredited by the MRC, Media Monitors' TV Spot Service -- but it provides some nuanced information on where other suppliers stand in the process, including iSpot.tv, Comscore, and Nielsen.

The "MRC and Nielsen recently reached agreement about the auditing that will be necessary prior to reconsideration of the accreditation statuses of these services," the MRC's update reads, adding, "While auditing of certain related areas already has been done, Nielsen’s remediation work will extend into Q2 2022, and therefore a complete audit report is not expected to be delivered to MRC until the end of Q3.  Additionally, an audit of Nielsen’s “Big Data” inputs to its future TV measurements is currently in process, with this audit report expected to be delivered to MRC in mid Q3."

That statement contradicts ones made by Nielsen CEO David Kenny months ago that its services would once again be accredited soon, and coupled with the MRC's updates for other services under review, reaffirm that the 2022-23 season will be the first to take place with no accredited currency in the marketplace.

During her comments at NBCU's developers conference this week, Executive Vice President-Measurement & Impact Kelly Abcarian went a step further, telling the network's guests that "time is running out.

"In 2024, the currency our industry uses today -- the one our industry has used for decades -- will completely disappear. Let me repeat that: The currency we use today is going away. No matter what. That means no more year-over-year comparisons -- and all the data that feeds your marketing mix models will be gone."

She went on to make the case that "we will all have to start over, so we are choosing to get started right now."

In terms of the nuances related to NBCU's "certified" currencies for national and local measurement, the MRC states it this way:

There are a number of other potentially viable alternative currencies being reviewed by NBCU and other big suppliers, but none of them are currently under review by the MRC.

On Wednesday, one of them, 605 announced its "Advanced Audiences" TV and "cross-platform" measurement service will be available to advertisers using Xandr's demand platforms, and touted it as part of a shift "away from traditional guarantees based on age and gender demographic ratings."

"Advanced Audiences will allow advertisers to define television audiences with greater precision using first- or third-party data, so sellers can generate optimized proposals across networks, dayparts, and selling titles that are more likely to deliver against an advertiser’s target audience and business KPIs," it claimed. 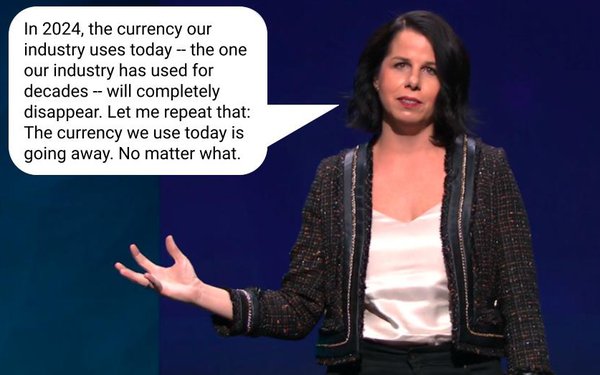