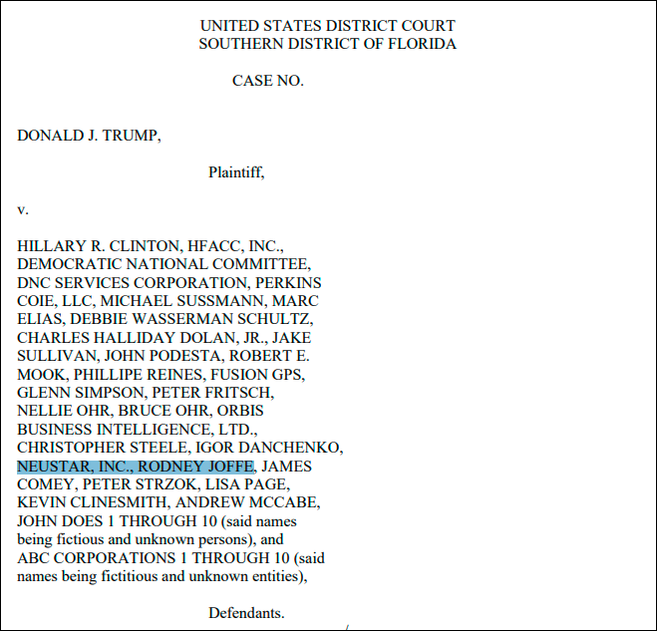 Former President Donald Trump on Thursday alleged in a sprawling lawsuit that former Democratic Presidential nominee Hillary Clinton and dozens of others -- including the tech company Neustar -- engaged in a “far-reaching conspiracy” to undermine Trump's 2016 presidential campaign by falsely accusing him of “actively colluding” with Russia.

“Under the guise of ‘opposition research,’ ‘data analytics,’ and other political stratagems, the defendants nefariously sought to sway the public’s trust,” Trump alleges in a complaint filed in U.S. District Court for the Southern District of Florida. “They worked together with a single, self-serving purpose: to vilify Donald J. Trump. Indeed, their far-reaching conspiracy was designed to cripple Trump’s bid for presidency by fabricating a scandal that would be used to trigger an unfounded federal investigation and ignite a media frenzy.”

The complaint alleges that another defendant in the lawsuit, Michael Sussman -- a cybersecurity attorney who had worked for the Democratic National Committee -- commissioned Neustar “to brazenly hack servers from highly-sensitive locations” including Trump Tower and the White House “to uncover proprietary data that could then be manipulated to give the impression that Trump was engaged in illegitimate business with a Russian bank, Alfa Bank.”

Neustar allegedly accessed data from computer servers and “stole trade secrets, in the form of proprietary, sensitive and confidential data, information, and knowledge.”

The complaint alleges that Neustar provided domain name service (DNS) resolution services to the Executive Office of the President as part of a “highly sensitive arrangement.”

Neustar allegedly “exploited this arrangement” by mining the DNS traffic and other data “for the purpose of gathering derogatory information” about Trump.

“DNS internet traffic data houses highly proprietary, sensitive and confidential data,” the complaint alleges. “For example, among other things, an analysis of raw DNS data could reveal a comprehensive view into an individual or a company’s website traffic, e-mail traffic, webmail traffic, chat messaging, in addition to the types of technology, hardware, software, programs, securities and processes being utilized by the servers.”

Neustar also allegedly “queried their holdings of non-public internet data against a lengthy list of more than 9,000 IP addresses, 3,000 internet domains, and 60 e-mail addresses and domains” related to Trump, as part of a search for “derogatory information.”

Trump alleges that he has incurred expenses of more than $24 million as a result of the alleged conspiracy, and is seeking at least triple that amount, or $72 million, in damages.