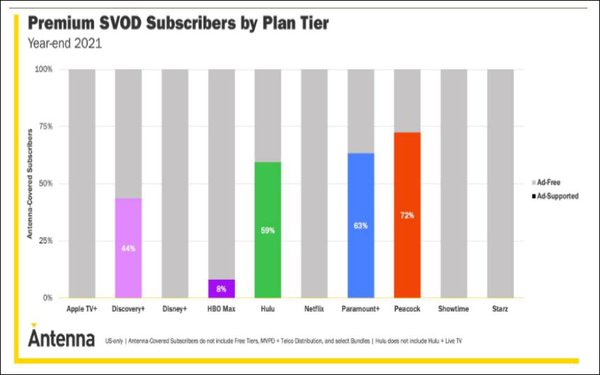 Nearly three quarters (72%) of Peacock’s total paid subscribers were on its limited-ads Premium plan ($4.99 per month) as of year-end 2021, per Antenna’s tracking, which does not track free tiers of Peacock or other streaming services.

In late January 2022, Comcast reported 9 million standalone paid subscribers, not counting subs included in promotional bundles, among its total 24.5 million monthly active accounts. While the company didn’t break out how many of the standalones were on the Premium plan versus the no-ads Premium Plus plan priced at $9.99 per month, Comcast Chairman and CEO Brian Roberts did  say that the company’s research indicates that 80% of consumers prefer an ad-supported service over a higher-cost, ad-free SVOD offering. “We see this in our customer mix, with the vast majority of our paid subscribers choosing the $5 paid AVOD (ad-supported video-on-demand) tier over the $10 tier without ads."

Paramount+ had the second-highest AVOD subscriber share as of year-end 2021 among the 10 services tracked by Antenna, with nearly two-thirds (63%) of its subscribers on its limited-ads version. Paramount+’s AVOD tier, like Peacock’s Premium plan, is priced at $4.99 per month, versus 9.99 for the no-ads tier.

Discovery+ has a lower proportion of subscribers on its ad-supported tier: 44%. That likely reflects its pricing plan, which charges consumers just $2 more to go ad-free — $6.99 versus $4.99 for the AVOD tier. As noted, Peacock and Paramount+ charge $5 more for their ad-free versions, and Hulu charges $6 more.

This seems to confirm that price sensitivity is a dominant factor in choosing among plan tiers, Antenna notes.

HBO Max launched its $9.99-per-month ad-supported option in June 2021, a year after the May 2020 launch of the $14.99-per-month premium no-ads version. Seven months later, at the end of 2021, the AVOD tier had reached a fairly modest 8% of total subscribers — perhaps because the ad-supported tier did not include access to the Warner Bros. day-and-date films, which drove significant user acquisition for the service’s premium tier.