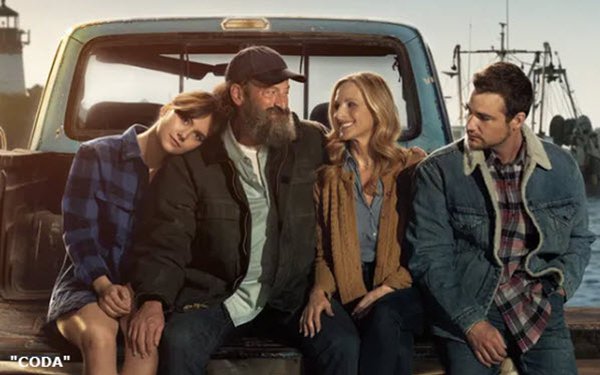 Wedbush Securities' Dan Ives is among those who have voiced that very plausible take.

“We view this Oscar win as a game changer for Apple on its content efforts and legitimizes the Apple TV+ as a major streaming platform with much more success ahead and the Street now starting to take more notice,” Ives wrote in a note to investors following the awards.

Prior to the event, Ives predicted that such a win would “catalyze more A+ talent coming to Apple first (or in the top bracket) and could propel Cupertino’s content efforts by multiples over the coming years with a major paid subscriber boost.”

Not surprisingly, Apple is promoting “CODA” front and center on the Apple TV+ site and in various promotions.

Apple has not released subscriber numbers for Apple TV+, but Ives estimates that the service has about 25 million paid subscribers and about 50 million “accounts” globally.

In comparison, at last report, Netflix had nearly 222 million paid subs, while Disney+ (which launched just days later than Apple TV+ in November 2019) had 129.8 million, Amazon Prime Video about 100 million worldwide, and HBO Max and HBO had a combined 73.8 million.

The “CODA” Best Picture win — the first for a streaming service — should attract more top talent to Apple and encourage the tech giant to up its Apple TV+ content investments.

Ives estimates Apple’s current annual original content investment at about $7 billion — a fraction of what the leaders are spending.

Ives also thinks that the award could improve Apple’s prospects for competing for the rights to NFL Sunday Ticket.

The analyst also alluded to the streamer’s place within Apple’s increasing shift toward a subscription-based business model.

“Apple TV+ is a small, but highly strategic component of the overall services ecosystem ($80 billion annual revenue in FY22) that is becoming a key monetization engine for the company over the coming years to tap its golden and unmatched installed base,” Ives has noted.

Now that reports have it that Apple is preparing to launch a subscription-based model that would combine access to the latest iPhone or other device models and access to services including Apple TV+, that observation takes on more significance — offering the potential for a mammoth expansion of subscribers, especially as Apple TVs also expand their user base.

Unlike rivals including Disney+, Apple has not displayed any eagerness to change its model to add an ad-supported tier.

But given that huge Apple install base (1.8 billion active users of its devices worldwide as of January), the company’s focus on low-churn, high-margin auto-renewed subscription-based services could well prove more lucrative than models dependent on high-churn stand-alone subs and economy-dependent ad spend.