Report: Ad Spend In Russia Will Fall By 50% This Year 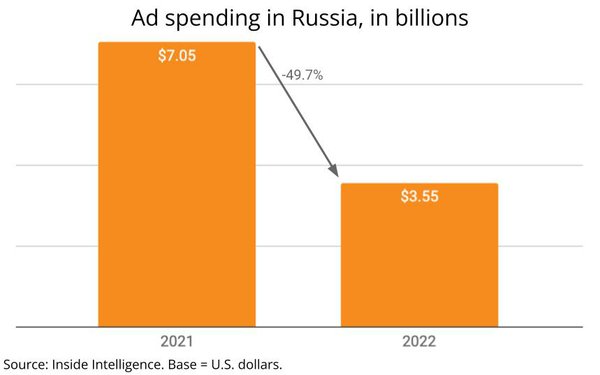 Ad spending in Russia will take a pounding this year, according to new estimates released by Insider Intelligence today.

The research firm estimates that ad expenditures in the country — which invaded Ukraine last month — will plummet by 50% this year to $3.55 billion. By comparison, last October, well before Russia played its hand, the firm predicted a 7.5% increase to nearly $6.9 million.

The revised forecast assumes Russian GDP will fall 35% quarter-over-quarter in Q2 and 7% for the full year — estimates that Insider Intelligence attributed to JP Morgan.

Russia’s economy is under pressure in part due to Western sanctions and the fact that many companies are pulling out in support of Ukraine.

The Russian invasion will have a detrimental impact on spending throughout Central and Eastern Europe —  where Insider Intelligence now forecasts a nearly 23% decline in 2022 to about $13.8 billion. Pre-war estimates saw the region growing nearly 8% to over $18 billion.

Of course, it’s hard to know where the numbers will end up, given that the war is ongoing. Insider Intelligence said it is not issuing figures for Ukraine right now, and will revisit these estimates in a Q3 update.

And the impact isn’t limited to the war-torn region either. Earlier in the week, Magna downgraded its ad-growth estimate for the U.S. by 1.5 percentage points, citing the war’s impact on business and consumer confidence.