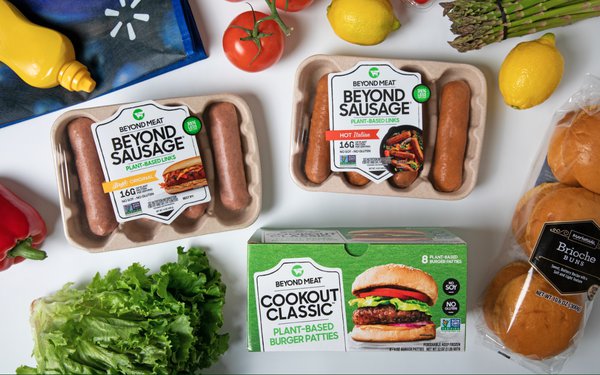 Plant-based foods had another good year in 2021—hitting a record $7.4 billion in sales.

While plant-based alternatives to dairy milk had a 4% sales increase, meat substitutes were flat, according to data from market research firm SPINS analyzed by the Plant Based Foods Association and The Good Food Institute.

This adds up to another challenging year for companies like Beyond Meat, whose plant-based burger made its retail debut in October of 2016.

In dairy milk alternatives, almond milk continues to lead the way at roughly 60% of the category—followed by fast-growing sales of oat milk at 17%.

According to the PBFA and TGFI, plant-based milk marketers continue to innovate with a multitude of ingredients including seeds, nuts and fruits.

“Milk is the perfect illustration of the power of merchandising plant-based foods next to their conventional counterparts,” with most retailers dedicating up to 33% of shelf space and up to 50% in natural outlets.

In a report last month about consumer behaviors impacted by the pandemic, Cowen Research noted that plant-based foods are here to stay, but with “a bias towards milk over meat.”

Comparing the adoption of plant-based milks to meats, Cowen noted, “There is no clear indication that consumers by and large are desirous of an alternative to animal meat,” adding that “non-adopters cite taste as the primary reason for not repeating.”

Moreover, “There is no built-in need state within meat, i.e., lactose intolerance-dairy.”

That view is reinforced by Jonna Parker, principal of IRI’s Center of Fresh Excellence.

“Plant-based beverages have a wider reach due to more eating/drinking occasions and a broader dietary impact—as there are more people who are lactose intolerant or sensitive,” says Parker.

The last two years have been particularly frustrating for Beyond Meat, which was founded in 2009.

Among other complications, the pandemic has severely impacted the company’s ability to sample its products in stores.

“In the first half of this year, we expect to resume robust in-store sampling programs for retail items,” Beyond Meat CEO Ethan Brown said in a February earnings call with financial analysts. “These effective programs have long been a staple of our field marketing efforts, given our conviction that tasting is believing.”

According to Brown, Beyond Meat’s household penetration was 6.6% as of Dec. 26 of last year.

Another factor besides COVID that's largely beyond the company’s control is its relationship with McDonald’s, which is testing the McPlant burger in partnership with Beyond Meat in some 600 locations in California and Texas.

Beyond Meat was hoping for increased awareness through McDonald’s advertising, but that hasn’t happened yet because Beyond Meat isn’t publicly associated with McPlant.

“Given its lack of Beyond branding, there is also the risk MCD takes production in-house at the end of its three-year contract with Beyond,” Piper Sander analyst Michael Lavery wrote last week. “Either way, the lack of clear branding also mutes the carryover benefit from consumer trial at MCD into retail."

Analysts at investment firm BTIG predicted that McDonald’s will alter its McPlant marketing because “the health and climate benefits need to have greater emphasis.”

On the McDonald’s website, McPlant is described as “a juicy burger made with a plant-based patty, co-developed with Beyond Meat.”

There is no mention of how the plant-based meat alternative helps either the environment or consumers' health.