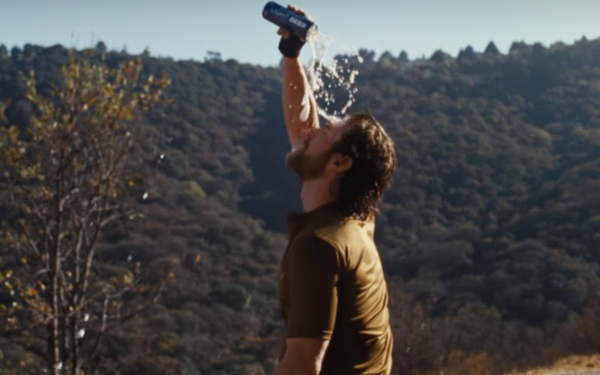 The Molson Coors brand is now doubling down on the taste factor in a campaign from DDB Chicago, which continues Miller Lite’s recent direct stabs at competitors like Anheuser-Busch’s Michelob Ultra.

“Light beer shouldn’t taste like water. It should taste like beer,” declare two :15 spots that launched during Monday’s NCAA men’s championship game. One features a bicyclist, the other a fitness fanatic, who each douse themselves with a beverage labeled “Extremely Light Beer” rather than drinking it. Each spot includes a nod to the “less filling” heritage too (“96 calories”) as well as the classic tagline, “It’s Miller Time.”

"Miller Lite has been an iconic brand since 1975 for good reason,” stated Sofia Colucci, vice president of marketing for the Miller family of brands. “It's remained true to itself while other light beers have diluted what they're all about.”

But if your beer does taste like water, why not just add new Miller Lite Beer Drops to the diluted brew?

A $4.07 bottle of these drops -- available online starting tomorrow, April 6 -- will provide two ounces of flavorful water to enhance two 12-ounce servings of non-Miller light beers with what the brand terms “the irreplaceable taste of a fine pilsner.”

“If, by any chance, you made the unfortunate choice of picking up one of those watery beers or you don’t have a Miller Lite nearby,” Colucci told Molson Coor’s Beer & Beyond blog, “you can add in these flavor-enhancing liquid Beer Drops.”

Miller Lite’s larger campaign, aimed at existing 25- to 45-year-old beer drinkers, represents a double-digit increase in dollar spend over last year, “to ensure we’re showing up in a big way this spring and summer,” the brand told Marketing Daily.

Other elements of the campaign will include additional TV, online video, national out-of home, podcast and radio buys, influencer and PR activations, partnerships in sports and entertainment, and a big localized push. The latter, in 25 key markets, will combine Miller Lite’s iconic white can with local icons, Colucci said.

“We’ll be wherever light beer that should taste like beer plays a role,” Colucci told Beer & Beyond. “We’ve got strong momentum this year, a cohesive campaign and some of the biggest plans we’ve had in a while. It’s going to be a good summer for Miller Lite.”