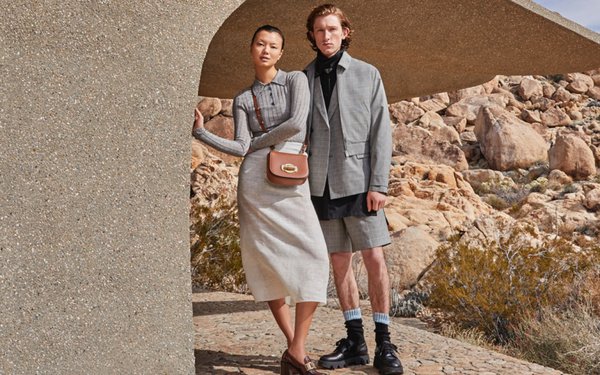 Farfetch says the strategic partnership will bolster Neiman Marcus' digital infrastructure. Initially, it will help expand the online presence of Bergdorf Goodman. In the announcement, Farfetch calls the deal part of its "pioneering omnichannel strategy to revolutionize integrated luxury retail."

The London-based company has been steadily disrupting luxury fashion since its launch in 2007, selling items from 1,400 brands in 190 countries. That growth has intensified since it went public in 2018, with high-profile partnerships in China.

This move makes sense for Farfetch, writes Ike Boruchow, an analyst who follows the company for Wells Fargo. "A partnership of this scale with one of the U.S.'s preeminent luxury retailers is a stamp of legitimacy on Farfetch's technology and where the luxury sector in the U.S. is going," he writes in his note on the deal.

Boruchow points out it also makes sense for Neiman Marcus to tap into Farfetch's existing tech rather than invest more heavily in digital on its own. "Recall Neiman's was among the first department stores to file for bankruptcy protection in spring 2020, and ultimately closed about 20 retail locations," he adds.

Neil Saunders, managing director of GlobalData, calls the deal "a vote of confidence by a new-generation luxury player in a more traditional business. After the travails of bankruptcy and restructuring, the deal underlines the continued relevance of Neiman Marcus in the luxury space."

The arrangement will give the department store access to Farfetch Platform Solutions and re-platform the Bergdorf Goodman website and mobile application.

It also makes it easier for both store brands to sell internationally, using the Farfetch Marketplace as a partner.