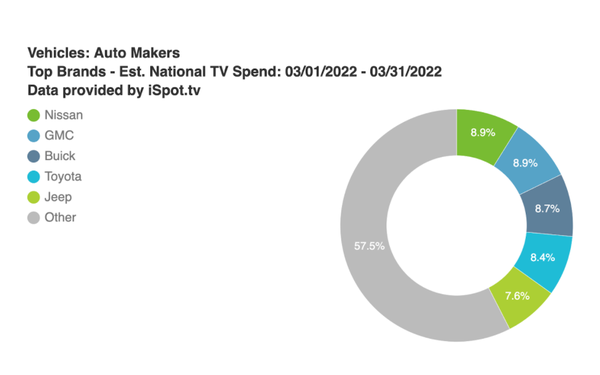 “As audiences are captivated by another entertaining and surprising edition of March Madness, automotive brands have been busy getting new ads in front of those eyeballs,” said Stuart Schwartzapfel, senior vice president, media partnerships at iSpot. “All five of March’s most-seen automaker creatives debuted that month, a clear sign that these brands view March – and college basketball – as a premier opportunity for new campaigns around sales and vehicle features.”

Infiniti registered the biggest spending increase for the month compared to March 2021, up 18,672%. After barely advertising on national TV in March 2021 with just 31 total ad airings, Infiniti had 2,339 airings in Mar. 2022 – and an emphasis on news programs (the source of 19.1% of the brand’s spend for the month).

Additionally, Lucid Motors spent $2.5 million in March 2022 after avoiding spending at all a year ago. Nearly 99% of this year’s media dollars went toward the Oscars.

Automakers emphasized men’s college basketball in March, with 23% more impressions during games this March vs. last. In general, basketball played a larger role in auto brand TV ad impressions, with 18.9% of all impressions on the month this year – versus 12.9% last March.