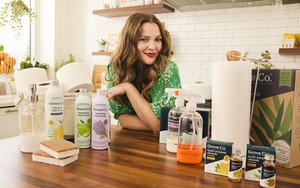 Grove Collaborative, the sustainable cleaning products company, is moving from a B Corp to the A-list, signing actor Drew Barrymore as its first celebrity spokesperson.

The company, committed to eliminating plastic from people’s daily lives, says Barrymore joins as both an investor and its first-ever celebrity spokesperson.

Plans call for Barrymore to act as global brand and sustainability advocate for the San Francisco-based company. It’s Grove's latest effort to “shed light on the severity of the plastic crisis and the urgent need for individuals and corporations to take immediate collective action to create a more sustainable future,” the company says in its announcement.

The news comes as Grove, a certified B corporation, navigates its transition to a public company. That involves another celebrity -- billionaire Richard Branson -- whose Virgin Group Acquisition Corp. is taking Grove public later this year.

Barrymore frequently appears in ads for other brands, and her Flower cosmetics and furnishings are sold at Walmart. Her talk show, “The Drew Barrymore Show,” is moving into its second season.

She appears in the new “Wish-cycling” campaign. In ads, which a spokesperson says will break later this month, Barrymore debunks the idea that recycling is the answer to reducing plastic waste. She explains that only about 9% of plastic items consumers set aside for recycling get recycled, inviting people to explore Grove’s home-delivery approach to cleaning.

Wish-cycling is the idea that just tossing something in the recycling bin and wishing it gets recycled “is a harmful assumption that often leads companies and individuals to justify creating and consuming even more single-use plastic products,” Barrymore adds.

Grove’s products include refillable glass bottles and the recently launched Peach Not Plastics line. It sells many other sustainable brands, including Method, Seventh Generation, Tom’s of Maine and Mrs. Meyer’s. And it recently began selling its products at Target.

Ads are scheduled to run on TV, social, radio and out-of-home.

Grove, launched in 2016, announced last year that it had agreed to a $1.5 billion deal with Virgin Group Acquisition Corp. II, a special purpose acquisition company sponsored by Virgin Group, founded by Branson.

Last month, it announced sales in the fourth quarter of its fiscal year of $87.3 million, down 6.2% from last year.

The company attributed more consumers returning to physical retail stores and reduced enthusiasm about cleaning and disinfecting at home. Still, it is encouraged by the brand’s buzz. “We also saw faster brand awareness growth than in any prior period, increasing from 27% to 37% over the course of the year,” Stuart Landesberg, chief executive officer, says in the announcement.

Its net loss increased to $32 million, from $13.3 million in the year-ago period.