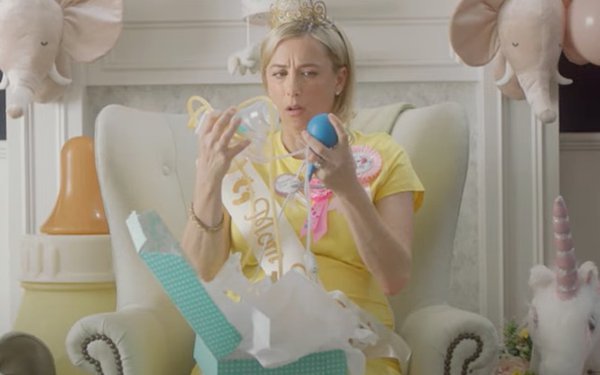 Breast-pump brand Willow is taking to television for the first time to counter unwanted “bad advice” heaped on new mothers in a campaign fronted by comedian Iliza Shlesinger.

Written by Shlesinger — who gave birth to her first child three months ago — a commercial from the ONA agency depicts an over-the-top baby shower featuring a cast of know-it-all male and female characters portrayed by the comedian.

Titled “Don’t Just Suck It Up,” the spot opens with a puzzled Schlesinger trying to make sense of a maze of cups and hoses she’s holding as a woman tells her the breast pump is “very discreet and it’s easy to use. You just take off all of your clothes. I think it comes with a helmet.”

Then a grandmother offers up an ancient breast pump, and a bro asks “What are you going to do when you go back to work?”

That’s followed by a breast-feeding woman saying “Promise me you’ll at least eat the placenta.”

In addition to social media, the spot is running on streaming platforms including Apple TV and Roku. It’s aimed at generating broader awareness of Willow’s product beyond pregnant moms, according to Sarah O’Leary, chief commercial officer of Willow Innovations Inc.

Asked how the brand connected with Shlesinger, O’Leary says “She was about to be a new mom and we felt like there was this really fantastic energy between what we were trying to say and her bold and unique comedic voice.

“When we connected with her, it was instantaneous chemistry.”

As part of Willow’s Register for More campaign, mothers can visit a dedicated website—dubbed a Moms Registry — where they can learn how how to advocate for paternity leave and view a return-to-work toolkit, among other resources.

In 2018, Willow introduced the first cordless, in-bra, wearable breast pump — whose Gen3 iteration is touted as 100% leakproof in any physical position and activity.

“We’ve had a mom actually complete a marathon wearing Willow and pumping during that,” says O’Leary.

Last month, the company launched Willow Go, which sells for less than previous models and lacks some of Gen3’s technological features.

Willow Go is available in 1,300 Target locations and on the retailer’s website, at BuyBuy Baby stores and on Amazon.com.