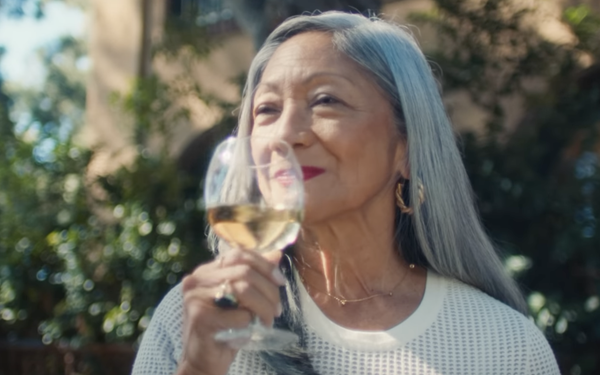 Is chardonnay an old people’s wine?

It’s also a millennial and Gen X wine, brand manager Alex Keyes told Marketing Daily. And that makes Clos du Bois the rare brand of any category that’s not afraid to use seniors to market, well, not just to seniors.

“Long Live” is designed to directly combat what Clos du Bois says is an over-representation of younger demographics in alcohol advertising, a claim backed up by a recent brand survey of 1,001 wine drinkers that found that only 37% of people 55 and older saw their demo authentically represented within alcohol ads.

The new campaign shows older drinkers as “lively, adventurous and wise,” the brand says. “We saw an opportunity to reach our consumer in a new energetic way that doesn’t lean into stereotypes, but celebrates who they authentically are -- filled with the life experience that we all hope to attain.”

That directly supports what John Zapolski, chief executive officer and found of older-adult-focused studio Alive Ventures,  told Marketing Daily: “We want to witness older adults having fun instead of being made fun of, falling in love instead of falling down, and starting new endeavors rather than starting to decline.”

For Clos du Bois, Courteney Cox represented a perfect behind-the-camera choice, according to Keyes: “She embodies our belief that age is irrelevant and that those with experience, style, personality, and panache are the type of people we all aspire to be. Courteney has been vocal and open about aging, as well as about the comfort and confidence she has in her own skin.” (Speaking of skin, the multitalented Cox last week added a line of hand cream to her Homecourt D2C home goods company.)

Keyes revealed that “another highly relevant spokesperson” will soon join the “Long Live” campaign and the brand on social media will be “partnering with content creators who celebrate their age.”

Clos du Bois isn’t the only brand treating seniors with respect. Asked by Marketing Daily for examples of other marketers -- outside of the expected healthcare/medical field -- showing positive examples of older adults, Alive Ventures pointed to Airbnb and Toyota Venza, among others.