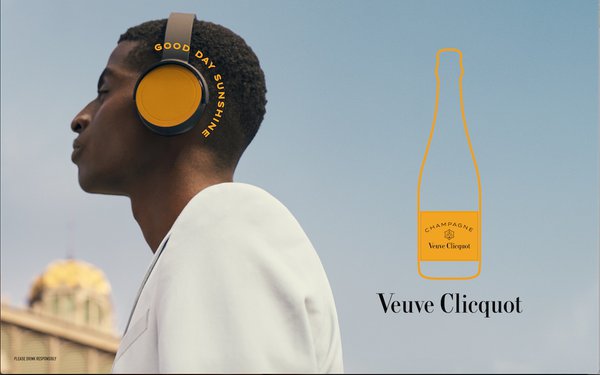 A cover of the classic Beatles song “Good Day Sunshine” by Canadian singer Charlotte Cardin keys a new global campaign celebrating the 250th anniversary of Veuve Clicquot Champagne. Like the brand’s label for nearly 150 of those years, the campaign is full of yellow.

As Cardin verbally greets the sun in a :30 spot, the visual shows a young man gazing at round (i.e., sun-shaped) yellow objects around him -- including a woman’s large earrings, another woman’s wide-brimmed hat, a couple carrying a bouquet of flowers, a man’s umbrella, a balloon and even an egg yolk.

The print buys include Modern Luxury, Vogue and Harper’s Bazaar; the digital is running in such outlets as Hearst Luxury properties (Harper’s Bazaar, Esquire, Elle), Vogue Digital, YouTube and Roku; and the out-of-home will be seen in the New York and Los Angeles markets.

The campaign, running through the end of 2022, will also include a “digital showcase” of the singer Cardin, details of which have not yet been released.

“This new brand campaign is the embodiment of Veuve Clicquot’s belief that every sunrise is the promise of endless opportunities,” said Carole Bildé, chief marketing & communications, Veuve Clicquot, in a statement. “From [company namesake] Madame Clicquot’s profoundly optimistic state of mind to our iconic yellow, our link to the sun is rooted in our DNA, and our 250th anniversary was the opportunity to claim it loud and clear!”

Veuve Clicquot, one of the first successful brands spearheaded by a woman -- the “widow (in French,” veuve”) took over the company after her husband’s death in 1805 and pioneered champagne-making techniques -- has been owned by Moët Hennessy for the past 35 years.