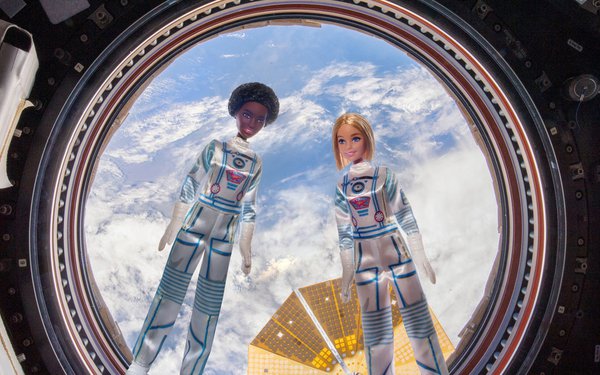 Look out, Bezos, Branson and you other space-hogging billionaires -- Barbie's on your tail. Some 57 years after she first put on an astronaut outfit, the classic Mattel doll is in orbit.

The International Space Station National Lab has invited two Barbie dolls to travel on Mission DreamStar, as part of its ongoing efforts to encourage girls to consider a career in aerospace, engineering and other STEM fields.

Now that Barbies are in orbit, they’ve gotten tours of the ISS that include the cupola, the Veggie garden and its Minus Eighty-Degree Laboratory Freezer (Melfi), as well as some hang time with Astrobees, the free-flying robots.

Once they land this summer, the dolls are headed to the Smithsonian’s National Air and Space Museum, where they will eventually be on display.

Calling it “one giant leap for dollkind,” Mattel says the partnership builds on its ongoing effort to close the Dream Gap. That Mattel initiative, launched in 2018, focuses on research indicating that girls begin to see themselves as less competent and intelligent than boys as early as five.

Since then, the Dream Gap has showcased 40 different STEM careers, including astrophysicist, space scientist and robotics engineer, bringing Barbie’s total careers to more than 200.

“It is important that we encourage girls to reach for the stars -- literally -- and pursue careers in aerospace and STEM,” says Lisa McKnight, executive vice president and global head of Barbie and dolls at Mattel, in the company’s announcement. “With help from the International Space Station National Lab team, we are reminding girls that not even gravity can hold them back.”

Mission DreamStar is also a sign that Barbie’s comeback is reaching the stratosphere. Earlier this year, the NPD Group named Barbie the top global toy property of 2021.

El Segundo, California-based Mattel plans to release a special edition of its “You Can Be Anything” series, highlighting careers in space.

A new Barbie space exploration line will be available exclusively at Target. The set includes a Barbie astronaut, a space teacher playset and a space room playset.

Girls have a lot of catching up to do. NASA reports that since the first woman cosmonaut flew in 1963, 75 women have flown in space -- but about 90% of space travelers are still men.

When Artemis makes its next moon landing, NASA has said that a woman will be on board.