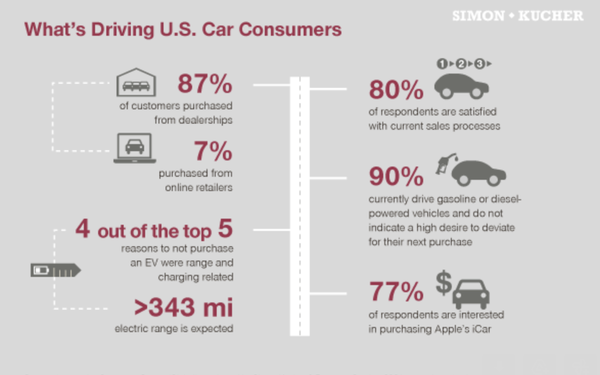 While about half of U.S. consumers surveyed express interest in electric vehicles and autonomous driving technology, there is also high satisfaction with more traditional technologies.

That’s according to a survey conducted by global consulting firm Simon-Kucher & Partners, which includes answers from 1,529 U.S. consumers as part of a global study that reached 10,000 consumers across 14 markets.

Vehicle price drives purchasing decisions, ranking as the most important purchase criterion for respondents. Price was followed by more value-based criteria, such as technology, brand and design, per the survey.

Conventional dealerships still come out on top when it's time to make a purchase. Eighty-seven percent of customers still prefer car dealerships, with 75% identifying the test drive as a key priority, says Peter Harms, partner at Simon-Kucher.

“However, there is certainly room for adaptation as the landscape shifts,” Harms tells Marketing Daily. “Digital tools that simplify and streamline the purchasing process should be considered opportunities rather than threats.”

Dealerships should in turn view themselves as “experience centers” that embody the virtues of their brand, he says.

“This means embracing technology and employing modern sales practices, while providing a space that delivers an opportunity to experience the forward-thinking technology that OEMs incorporate into their vehicles,” Harms says.

A majority (80%) of respondents reported overall satisfaction with the current sales processes. While negotiation is the top reason for dissatisfaction, 69% of respondents say it’s still important to be able to engage in that process to get better pricing.

Electric vehicles are gaining acceptance but will need to power up to boost sales. While a key trend globally has been the increasing acceptance of EVs -- driven by sustainability concerns and fears of increasing regulatory restrictions on conventional vehicles -- 90% of U.S. respondents currently drive gasoline or diesel-powered vehicles and will consider a gas-powered vehicle for a new-car purchase.

Price, range, and charging infrastructure are the key reasons given by respondents for not considering an EV. On average, respondents expect a driving range of over 343 miles, according to the survey.

Reactions to autonomous driving technology remain mixed. Forty-five percent of respondents indicate excitement about the technology, while 32% admit fear of autonomous technology. System malfunctions, failure to react to human behavior, and the possibility of the car being hacked or externally controlled are the top concerns.

Though the overall view is that autonomous technology is a positive move technologically and will become standard in the coming years, most respondents strongly perceive autonomous vehicles as a luxury and believe they are too expensive.