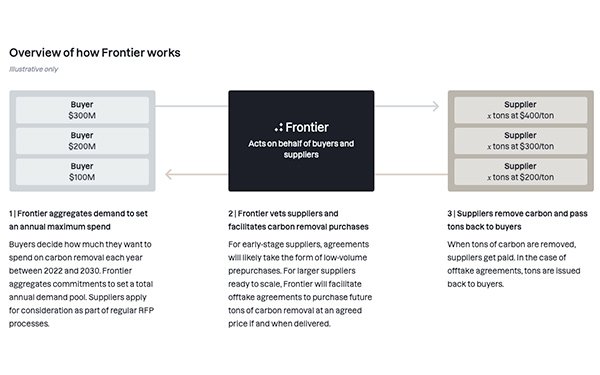 Alphabet and Meta, the parent companies of Google and Facebook, joined Frontier, a subsidiary of payment processor Stripe, which pledges spending will eventually go toward companies building approved carbon capture technology and projects.

“At Alphabet, we know firsthand from our long-standing history of working to advance new climate solutions that signaling early demand can spur innovation and lower the price for everyone,” Kate Brandt, chief sustainability officer, Google, wrote in a statement. “That’s why we are joining this exciting coalition of climate leaders, who jointly see the promise of new carbon-removal technologies and the power of sending a clear demand signal to the market.”

The project supports scientists and entrepreneurs worldwide working to build new technology to remove carbon dioxide in the air and ocean to curb the effects of climate change. The goal is to remove between 5 to 10 billion tons of Co2 per year by 2050.

Data from the most recent Purpose Disruptors report found that the advertising industry could be adding as much as 28% more to the annual carbon footprint of every person.

The Frontier program, worth nearly $1 billion, is an advanced market commitment (AMC) designed to fight climate. The companies commit to purchase carbon capture technology when it's developed. Ecommerce company Shopify and consulting firm McKinsey Sustainability also are part of the program.

“Reaching net zero emissions is key to building environmental resilience and to realizing a future that delivers sustainable and inclusive growth. Carbon removals have an essential role to play,” McKinsey Senior Partner, Dickon Pinner, wrote in a post.

The AMC model guarantees demand to accelerate the development of new products.

How much Co2 is produced by a Google search? In 2009, climate researchers estimated that two Google searches emit 7g of Co2, the same as a boiling electric kettle. Since then, Google, Bing and other media companies have pushed to reduce their carbon footprint.

In practice, Frontier’s team of technical and commercial experts facilitate purchases from high-potential carbon removal companies on behalf of buyers. Over time, the organization plans to open Frontier to new buyers to further increase demand and spur new supply.

The concept of an AMC, piloted a decade ago, is borrowed from the development of vaccines. The first AMC accelerated the development of pneumococcal vaccines for low-income countries, saving an estimated 700,000 lives. This is the first time the model is being applied to carbon removal at scale.

Here’s how it works: buyers decide how much they want to spend on carbon removal and pool their financial commitments through Frontier. Frontier’s technical experts find the suppliers to identify the most promising technologies and facilitate the purchases. Guaranteed buyers help to secure financing and grow the company’s team.

The program was announced just ahead of Earth Day 2022, which takes place April 22.