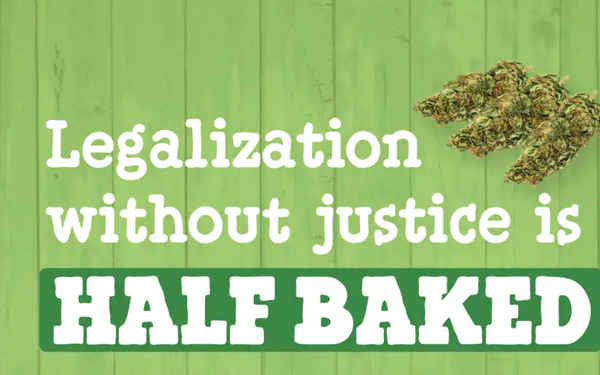 Ben & Jerry's may joke about ice cream -- but it's serious about addressing racial disparities in cannabis arrests, and is launching an ad campaign aimed at U.S. Senators.

Just as Stoner Nation gears up for 420, the Unilever-owned company says it is partnering with the American Civil Liberties Union to launch the effort, demanding that the Senate improve the country's "half baked approach to cannabis justice."

The company says the 4/20 campaign is scheduled to run on social media, offering a one-click way to message members of the Senate.

Earlier this month, the U.S. House of Representatives passed a landmark reform bill, which would go a long way toward addressing the existing racial disparities. The Marijuana Opportunity Reinvestment and Expungement Act, or MORE Act, would take marijuana off the federal schedule of controlled substances. And it would also expunge federal marijuana convictions dating back to 1971. Further, it would mean that federal public benefits and security clearances could no longer be denied based on marijuana offenses.

Even though 39 states have decriminalized or legalized cannabis, Black people are four times more likely than whites to be arrested for low-level marijuana crimes, reports the ACLU.

"The Black and Brown community have borne the high cost of cannabis prohibition and the system of mass incarceration that it has fueled, while white men reap the financial benefits of the legalized cannabis industry," says Chris Miller, global head of activism strategy. "That's why the Senate must immediately pass legislation that begins to right the wrongs of the decades-long war on drugs by legalizing cannabis and expunging records while restoring equity to the booming legal cannabis industry."

Other polls cite slightly less enthusiastic responses. In November, Gallup reported that support for legalization had risen to 68%, an all-time high in its surveys.

Still, the MORE Act is likely to do little good. The bill passed the House primarily along party lines, as did a similar bill in 2019.

But Senate Majority Leader Chuck Schumer (D-NY) is working on that 2019 bill, and has said he is reaching out to Republican senators to try and build bipartisan support.

Observers do not expect it to fare well -- especially given President Joe Biden's reluctance to make pot legal.

Ben & Jerry's has long been outspoken on political issues. Last summer, it faced accusations of anti-Semitism when it announced it would no longer be sold in Occupied Palestinian Territory (OPT). And in February, it launched an outdoor advertising campaign in Los Angeles, highlighting Colin Kaepernick's Know Your Rights Camp.

Nor is it new to the cannabis justice crusade. It's been using the "Half Baked" line for several years. In 2019, it announced it would introduce a CBD-infused ice cream if and when federal laws are changed.