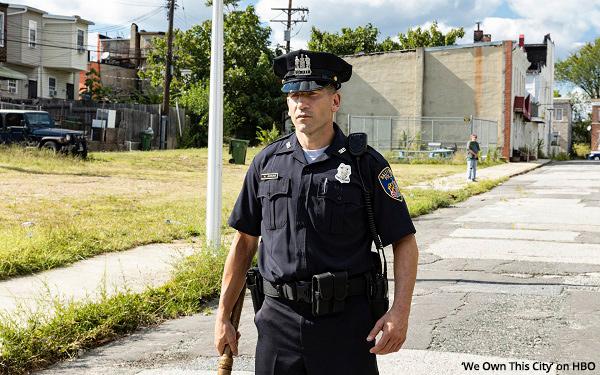 TV’s hard-boiled Bard of Baltimore, David Simon, returns to the city of “The Wire” and “The Corner” for another TV take on the crime-and-police woes of that beleaguered city.

I’m calling it beleaguered because just about all I know about Baltimore is what I have absorbed from David Simon’s TV shows over the years, and in all of them, this city is beleaguered indeed.

What little I know of Baltimore outside of Simon’s depiction of it seems to confirm the underlying thesis of his TV shows -- that Baltimore’s problems of violent crime, policing and community relations are deeply ingrained and by the looks of them, probably unsolvable.

Because of the seeming intractability of these problems and issues, Simon is back at it again with “We Own This City,” premiering Monday on HBO where “The Corner” and “The Wire” also aired.

The first episode of “We Own This City” that the TV Blog previewed last week does not exactly specify who in the show’s title “owns” the city. Perhaps it refers to all of the warring factions in the show, each of which might feel as if Baltimore is theirs.

A basic difference between “We Own This City” and Simon’s previous Baltimore cop shows is that the new one breaks out of the Baltimore city limits to encompass police and sheriff’s departments in the adjacent counties.

This is meant to illustrate how the crime problems in Baltimore have spilled over into the city’s neighboring communities.

In this telling, a big part of the problem is the corruption of the Baltimore police from which the city’s crime problems expand and grow. By contrast, the county police are still seen as fighting the good fight.

“We Own This City” was developed by Simon and George Pelecanos, both of whom are executive producers.

If there is a standout star in the show’s sprawling cast then it is Jon Bernthal (pictured above), who plays a veteran Baltimore cop named Wayne Jenkins who heads a rough-and-ready gun-tracing task force.

The show tells its story in parallel to the story of Jenkins’ rise through the ranks of the BPD. The storytelling starts in the present day, in which Baltimore’s uniformed cops are avoiding confrontations and arrests because they fear being accused of undue brutality, especially since their arrests are now being filmed by crowds of passersby wielding cellphones.

The story then goes steadily backwards. In the second episode, it reaches as far back as 2003, which places it, at least for these portions, within the time frame covered in “The Wire,” which aired from 2002 to 2008.

Pointing out that “We Own This City” covers the same subjects as its two Simon predecessors is by no means meant to condemn the show as old-hat or redundant.

On the contrary, this show stands right alongside both of them, and has every chance of being as well-remembered as them too.