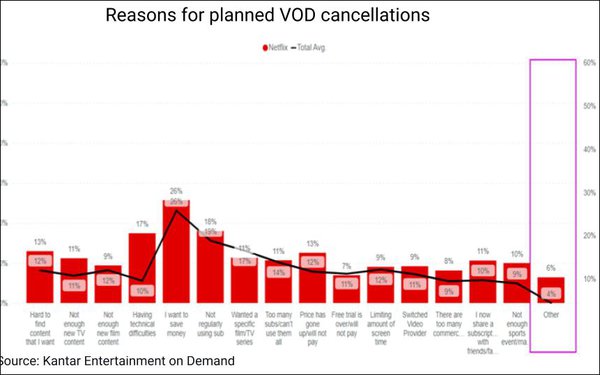 While many analysts were expecting Netflix to meet or exceed its projected Q1 subscriber gains right up until the streaming giant dropped its bomb about losses late Tuesday, Kantar was presenting a very different outlook for Netflix and the subscription-based video-on-demand (SVOD) services sector in general.

An analysis from Kantar’s Entertainment on Demand service, offered just prior to Netflix’s earnings presentation, pointed out that Netflix’s U.S. penetration was down 0.3% in Q1, following a 0.5% decline in the previous quarter.

While other leading services saw growth, the rate of growth slowed in the quarter.

Further, Net Promoter Scores, the most-used measure of customer satisfaction, are down by four points on average, to 39, across all streaming services. No price tier is exempt: SVOD and FAST services are each down four points, and AVODs are down three.

The market appears to be reaching a tipping point at which consumers are unwilling to take on more streaming services because of the difficulty of finding content amid too many choices.

“Saving money is still the number one reason for cancellation, but it has not significantly driven a greater proportion of cancellations this quarter,” notes Kantar. “Instead, it’s content that’s more likely to drive cancellation: either wanting to watch a specific series/film and then cancelling or it being hard to find content people want to watch.”

Yet at the same time, specific content has become the main or only growth driver for paid platforms, and “not enough” new film and TV content are also among the key reasons for planned VOD services cancellations.

Price-related factors are heavily linked to Netflix for raising its price in January (from $13.99 to $15.49) and Apple TV+ for ending the free trial enjoyed by many of its users since its inception. Apple TV+ also saw declines linked to cancellations after viewers finished watching the original series “Ted Lasso.”

Netflix over-indexes on seven of the 16 planned cancellation reasons — including, ironically, by a small margin, on “having too many commercials/ads,” despite its (so far) ad-free status. (See chart above and breakouts below.) 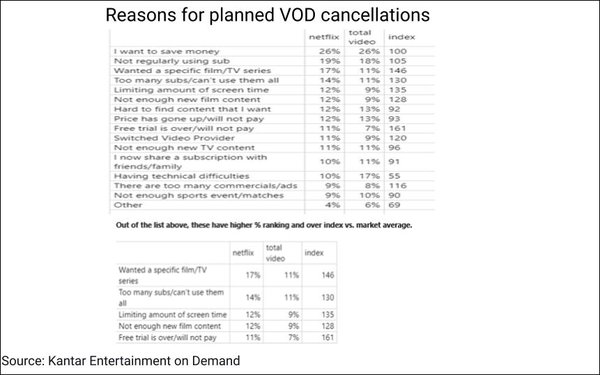 Although Kantar believes that the subscription VOD market could see contraction in Q2, it reports one hopeful sign: Cancellations for the quarter are so far at 4% — an improvement over Q4 2021’s 5%.