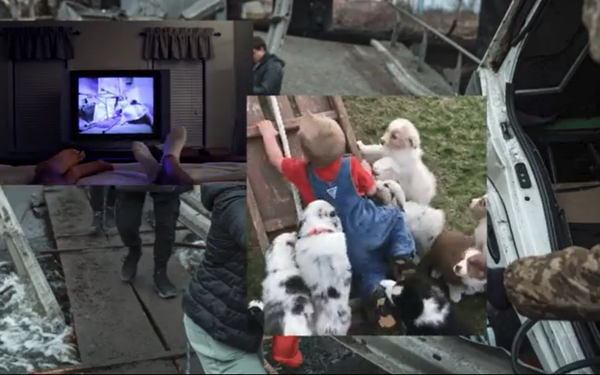 Like many ad agencies in Ukraine since the Russian invasion began earlier this year, Kyiv-based Drama Queen has shifted a lot of its focus to campaigns supporting the country’s resistance.

One of the main ideas behind the brand and a campaign supporting it is that often wars, which shock at first, become “just another war” that most people outside of the war-torn area pay less attention to as the conflict drags on. “Don’t let this war be a casual war,” one spot in the campaign urges.

The effort also focuses less on the horrific toll being inflicted on the Ukrainian people and more on the strength and bravery of those fighting the good fight.

The campaign takes a sometimes-whimsical approach. “Please finish your coffee,” the narrator intones in one effort. “No need to give up on your life, get depressed or take up the grandpa’s gun. Instead, donate! Donation is your best weapon in this fight for freedom and humanity.”

The results might just be magical. Per one social spot.  “Finally, you can be like Gandalf. But for real.”

The agency uses a similar tone in other messaging, sharing optimistic news from Ukraine, celebrating successful charity projects, and encouraging followers to stand on the “light side, like Skywalker, but this time for real.”

Even though the agency’s team is scattered across western Ukraine and other parts of the globe, technology unites them as they continue to work.

“We meet in Zoom often like never before,” says agency creative director says Anna Goncharova. “We support each other, cry together, or celebrate our small victories. Gradually, we’re getting back to our normal work rhythm, as much as it’s possible in the present situation.”

While Drama Queen has stepped up to help its country, it’s also open to working with foreign companies and has collaborated on a number of international projects and is “hungry for more,” as a rep put it. Check out more about the agency here.