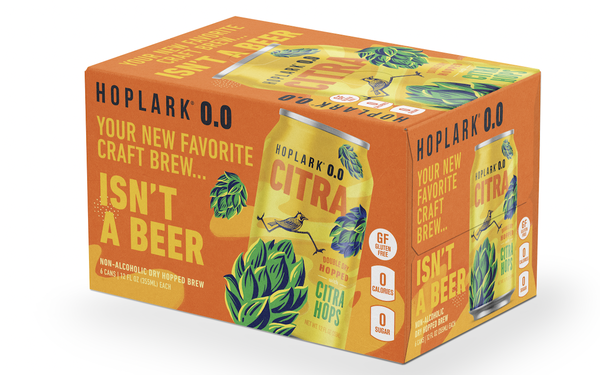 Last month, we wrote about beer alternative Hop Wtr’s ad campaign supporting its long list of nos: no alcohol, no calories, no carbs, no sugar, no gluten, no GMOs.

As its name suggests, though, the new Hoplark 0.0 Citra does have flavor. Rather than adding in hop extracts, Hoplark’s co-founder and chief executive officer Dean Eberhardt tells Marketing Daily, “We are crafting the product in-house using the actual plant ingredients. We use Citra hops...so named because it has a flavor similar to citrus fruit.”

Next up in the Hoplark 0.0 line, Eberhardt reveals, is Really Really Hoppy, “our take on a West Coast IPA using Simcoe and Citra Hops and decaf black tea.”

That makes sense since Hoplark started out in 2018 with a line of sparkling HopTeas, replacing alcoholic malt with non-alcoholic tea. It then launched sparkling Hoplark Water in 2021.,

Hoplark’s launch is being promoted with the help of two agencies: New York-based Sircle Media for social media advertising, and Los Angeles based Konnect for public relations,influencer relations and organic social.

“There is an incredible word-of-mouth activation with our customer base, and the most important thing we can do is drive awareness,” says Eberhardt. “We are planning on doing this by rapidly expanding distribution and activating customers in the market.”