Broadband-Only HHs Rise Sharply In Q4, OTA Not So Much 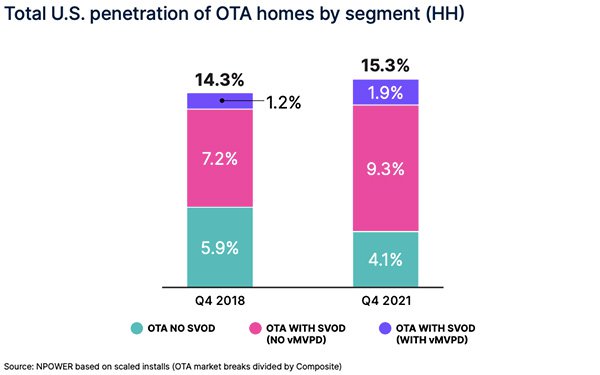 While homes that get over-the-air (OTA) TV content continue to grow slowly, the greatest change over the last three years has been with broadband-only (BBO) homes -- comprising 27% of TV homes in Q4 2021, according to Nielsen. Three years earlier, the percentage was 9%.This has come largely at the expense of homes with traditional cable TV and other TV services -- so-called "Cable Plus." These make up 57% of U.S. homes, down from 76% in the fourth quarter of 2018.

The remainder are OTA homes -- now estimated at 15%, up from 14% three years earlier. Although OTA homes are slowly growing, they have evolved into three distinct groups, says Nielsen.

The biggest of these groups is OTA TV homes that have broadband and get at least one individual streaming video-on-demand (SVOD) platform, like Netflix.

The smallest group is those homes that have OTA TV, but also have broadband -- with at least one SVOD -- and also have a virtual pay TV provider such as Sling TV, YouTube TV, or Hulu+Live TV.