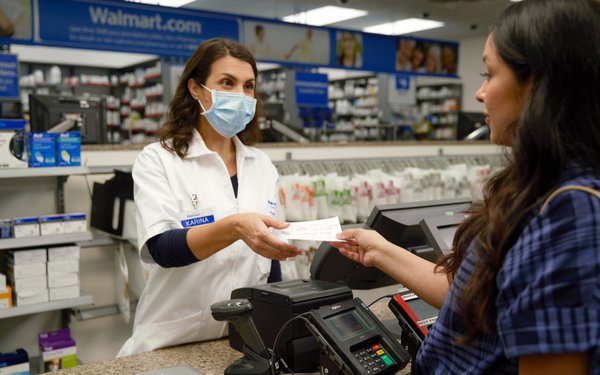 Walmart’s share has remained comparatively even with the 9% reported in 2014.

Amazon’s muscle is strongest in electronics, appliances, sporting goods, hobbies, music and book spending, garnering about five times as much as Walmart. For instance, Amazon captures nearly a quarter of all U.S. spending in the electronics and appliances category, compared to 5.1% for Walmart.

Walmart’s remaining strength is a mighty one: It continues to be tops in groceries, with people spending ten times more on food and drink at Walmart. In total, Walmart captures 18.6% of those dollars, compared to just 1.9% at Amazon.

While Amazon has invested in many formats to gain more clout in groceries, the latest data from Brick Meets Click shows America’s love for online grocery shopping is stable, but evolving.

In March of this year, for example, spending on all online groceries fell 6% to $8.7 billion. That makes for a decline of 2.5% in the first quarter, says the Barrington, Illinois-based market research company.

Another place Walmart shines is in pharmacy sales and wellness. And it’s putting additional spending behind its healthcare options.

The effort includes a partnership with the American Heart Association’s “Reclaim Your Rhythm” blood pressure campaign.

The retailer has hosted these events since 2014. It says 4,000 of its stores are in medically underserved areas and that so far, it’s provided more than 4.7 million free health screenings.