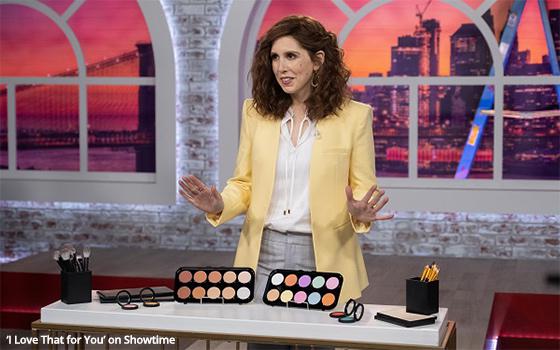 The world of television home shopping channels would seem to be ripe for TV and movie satires, but a Google search comes up with very little in the way of home-shopping parodies.

This is not the case for another category of TV content that has been an easy target for TV and movie spoofs over the years -- soap operas.

When you Google "TV soap opera parodies" you come up with examples that are well-known -- among them, the prime-time TV comedies “Mary Hartman, Mary Hartman” and “Soap,” the movie “Soapdish” and others.

This weekend, however, home shopping gets a high-profile going-over with the arrival of the Showtime comedy “I Love That For You.”

The show is from Vanessa Bayer (pictured above), one-time cast member on “Saturday Night Live.” She is the show’s creator, executive producer and star.

She plays a woman still living at home and working at an Ohio Costco managed by her father when she gets up the gumption to audition for a home-shopping network.

Her character, Joanna Gold, has been a rabid fan of the network since childhood, particularly during a period of her girlhood in the 1990s when she waged a battle against leukemia.

The leukemia story is taken from Bayer’s real life. As a child, she too had leukemia and survived it. But nowhere in her bio does she appear to have ever auditioned for a home shopping network. Thus, that part of “I Love That For You” is apparently fictional.

The fictional shopping network in the show is called the Special Value Network, known far and wide as SVN.

It is more specifically modeled on QVC than HSN (Home Shopping Network) by virtue of its location in Pennsylvania, just like QVC, and even the appearance of its headquarters, which resembles the real-life QVC “campus” in that state.

As it happens, QVC and HSN are one and the same now anyway, having merged in 2017.

Like the soap spoofs, “I Love That For You” focuses on the type-A personalities that make up the staff of a typical home shopping channel -- both on-air and off.

The on-air category is represented best by Jackie Stilton (played by Molly Shannon), the long-running star of SVN who has been a top seller on the network for 30 years. Not surprisingly, she is Joanna’s idol.

In the series’ premiere episode, Jackie is directed to mentor Joanna. But instead of coming across as snooty and dismissive of her new pupil, Jackie and Joanna soon appear to be establishing something akin to friendship.

In this way, “I Love That For You” veers off into an unexpected direction. For a satire such as this one, it is not unreasonable to assume it would be savage bordering on cruel from beginning to end.

But while the satire here can be just as cutting as one would expect, the show actually comes across as more sweet than sour, especially as it pertains to Joanna Gold’s story.

The savagery is more or less embodied by one character, the company’s numbers-driven CEO Patricia Cochran, played by Jenifer Lewis.

The character is so tough and unforgiving that she provides a very strong counterpoint to the aura of sweetness and innocence that surrounds Joanna.

One of the best things one can say about “I Love That For You” is that it is very smart and well-written. The scenes that replicate the content on the real home-shopping networks are right on the money. It is evident that somebody did their homework.