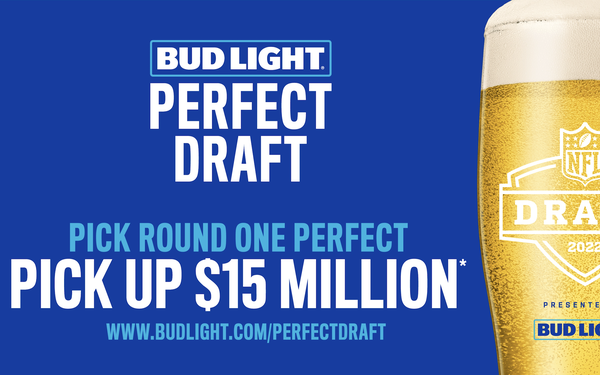 A few months back, Budweiser ran a sweepstakes offering a $1 million prize to its winner.

That pales, though, in comparison to the $15 million that sister Anheuser-Busch brand Bud Light is prepared to bestow on anyone (well, 21+) who picks all 32 first-round selections in the exact order for this Thursday’s NFL Draft.

The odds of that actually happening seem about as likely as picking a perfect March Madness bracket, but the brand has still devised a strategy for giving out the gigantic sum: it will be paid as an annuity of $300,000 a year for 50 years. So, the younger the winner is, the better chance of getting the entire prize.

And, no, the rules don’t stipulate what happens if there are somehow two winners.

Bud Light, which is the NFL’s official beer and hard seltzer sponsor, has partnered with former NFL tight end and 2007 first-round draft selection Greg Olsen to promote the contest via a :30 spot in which Olsen says the winner will be “paid like a first-rounder.”

Indeed. Olsen signed a five-year $10.7 million contract after he was drafted by the Chicago Bears. Plugging that number into the CPI Inflation calculator, we found it would now be worth $14.84 million -- or pretty close to $15 million.

In addition to the high-reward contest, the “Perfect Draft” promotion also includes a sweepstakes. Each entrant, in addition to choosing their 32 picks, also names their favorite team. If they select the correct pick by that team (or via a random drawing if their team doesn’t have a pick), they could win one of 32 prizes, consisting of either a team merchandise pack valued at up to $571 -- or a $100 gift card. The latter, for unexplained reasons, go to the Chicago Bears, Dallas Cowboys, Green Bay Packers, Las Vegas Raiders, Minnesota Vikings and Washington Commanders winners.

Separately, starting on Thursday and lasting through May 5, Bud Light will offer rebates on six-packs or (rather appropriately, we think) draft beer, in six states that are home to NFL teams without first-round draft picks.

One of those states is Nevada, which also happens to be hosting the draft in the Raiders’ home of Las Vegas.

Raiders fans, though, and anyone else attending the draft in person, are invited to visit the onsite Bud Light Draft Tavern to select the first five picks.

Anyone who does so will get the chance for their own prize.

No, nothing like $15 million. But, for NFL fanatics, an upgrade to VIP draft attendance should be more than enough.