How To Create A Viral Marketing Campaign Without Really Trying

Last week, people began tweeting photos of New York City subway ads that appeared to be for “The Northman,” an action-packed epic starring Anya Taylor-Joy, Nicole Kidman and Bjork. The odd thing is that the ads didn’t say “The Northman,” but instead featured pictures of the stars along with the line “only in theaters April 22.” 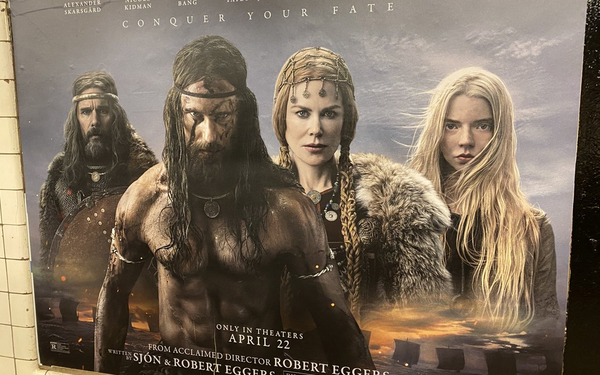 Some people on Twitter thought it was a mistake. "Lol they forgot to print the title on the subway ads for The Northman," tweeted one.

But many Twitter users took the lack of a title as a challenge. One proposed the ads might be for “The Flintstones 2: Bad Day in Bedrock.” Another suggested the movie might really be “Finding Nemo 3.”

Still another proposed the ad was really for “ABBA: the movie.”

By excluding the title, the Focus Features film managed to create more buzz than it would have otherwise.

As Wired notes, “The Northman’s Seemingly Accidental Viral Marketing Campaign” “also serves as a reminder that marketing can be fun.”

More Twitter speculation on the ad: The movie could have been  everything from "Waterworld 2" to a Motley Crue biopic to something related to "Game of Thrones."

The marketing for "The Northman" comes after some clever movie marketing over the past decade or so. Remember ads for "The Dark Knight" that promoted “Harvey Dent for District Attorney” or the “Toy Story 3” ad for Lots-o’-Huggin Bear?

In other words, by going title-less, “The Northman” managed to create more buzz than it would have if it had run a standard ad campaign.